What the Hell Am I Going to Do With Unlimited Text Messaging?

I finally got a new cell phone. Here it is next to the old one -- can you tell which one is which? It might be harder than you think, since the external displays are both monochromatic: 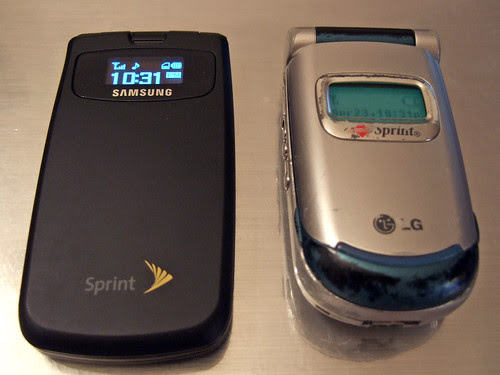 But look: When opened, the new phone dwarfs the old phone -- is this not a giant step backwards? 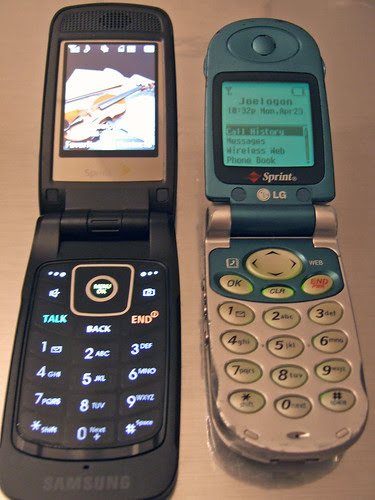 This is where the tricky third-dimension comes into play: 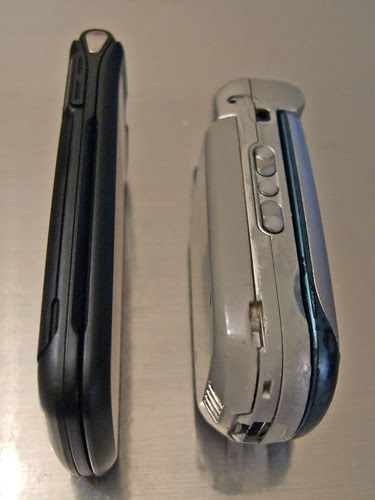 The new phone, she is the thin.

Now, I've been with Sprint since 2000, and I've been out of contract for a while; if I couldn't get a deal from Sprint that included a new phone, I was going to switch to Cingular/AT&T (honest).

In return for re-upping for 2 years, I got the phone, and I ended up keeping my current minutes (650 anytime, 500 mobile-to-mobile), plus now have unlimited 7pm night and weekends ($5 with a $5 offset), and unlimited text messaging for $8. Which brings my current bill before taxes and corporate discount to $43.99.

(On the Sprintusers.com forums, there's a whole "can-you-top-this?" culture when it comes to discussions of retention plans and other deals. I admit it, I'm not a good haggler, so I'm a little jealous, though some people practically claim they get paid to be a customer.)

My current problem now, though, is that I don't have a data plan. I thought I was getting it included with the phone, but there was no record of it, and at a la carte pricing, that's $15 extra per month, which is moving my bill decidedly in the wrong direction.

I honestly would rather give up some minutes and pay less (which is kind of heresy, even though I don't currently go anywhere near my monthly caps). So I will have to see what I can finagle.

The unlimited texting may be supreme overkill; I've hooked my phone to Twitter, but I'm still having trouble trying to figure out how I can meaningfully use hundreds and hundreds of text messages per month to justify unlimited texting (even if it's only $8/month).

I'm still pretty new with all this texting stuff, which is kind of odd for a word guy. It took me a while to get the hang of the T9, though it's pretty neat.

Anyway, I have a 1-gig MicroSD card (that's Micro, not Mini -- won't make that mistake again, though I was able to cancel the order) on the way, as well as a USB cable, so I can transfer data to and from the phone until I get a data plan.

I'm also shopping around for a Bluetooth headset (just for car use, I swear), so I guess it's too late for me now.

the samsung bluetooth headset is pretty cool. i leave it in my car (i don't find much use elsewhere). i think it's a good investment.

Uh oh. Sounds like someone is on their way to carpel tunnel.

I can't look at the screen while I do Predicative Text. I just glance at it to make sure it got the word right after I type each in. ;)