Social Roundup: Kickball, Over the Rhine, Jimmy's and Liberty Tavern

Our first kickball game of the spring season was this week; I'm playing Thursday nights with the David Hasselhoff Fan Club. Our color is brown: 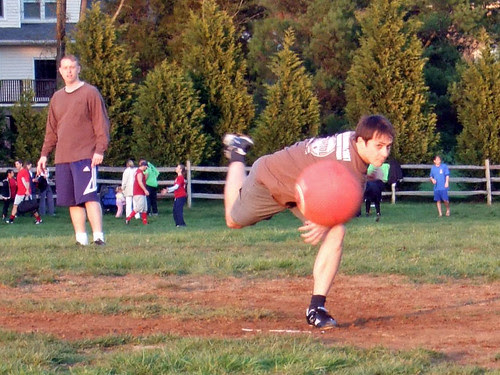 I hung out at Carpool for a bit, then bolted for Jammin' Java in Vienna, where
Over the Rhine was playing a show rescheduled from December.

I got there a little late, a few songs into their set. It was a seated show and I was in the back, but I was eventually able to work my way up to the side of the stage: 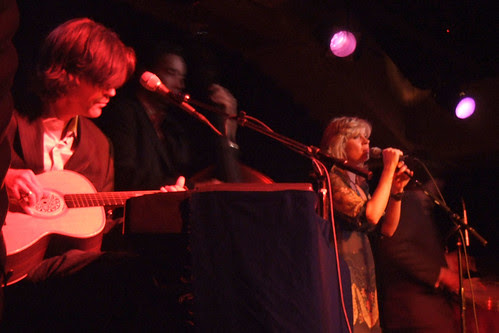 Over the Rhine's Linford and Karin

It was a good show. I bought 2 CDs (though one was a compilation album). You can see the full Over the Rhine photoset here.

I also ran into my friend Mike, who's a photographer and shoots there a lot.

After the show, I made it back to Carpool (at about 11pm) to hang out with the holdouts.

My back and legs were really sore the next day, which is kind of sad, since I only made it to bat once, so there wasn't really any running to speak of. And, of course, it was only tonight that I realized that an over-the-counter painkiller might help with the soreness. Duh.

Friday, went to Jimmy's for the fish fry, where I had a very large piece of fish.

The crowd seemed a lot more college than I remembered, and it wasn't just because of all the Virginia Tech shirts. I'd just gone to get something to eat, so I left before the fire-breathing bartender show at midnight.

Saturday, I was woken up by the credit card company, calling to check on some suspicious charges on my card. Boy, that got me up in a hurry -- I fell out of bed going for the phone.

It turns out that my payment to my French-based domain name registrar triggered the alert, which was a bit odd, since I've used them for a few years now.

Saturday night, went to Liberty Tavern (after reading this blog review); as Metroblogging DC notes, it was very loud. Plus, the bartenders were slammed (a situation not helped because they didn't have a door guy and they had to check IDs); hopefully, both of those things were just part of the opening commotion.

I didn't take any pictures (didn't have the camera, but had the new phone, which has a 2-megapixel camera). There was lots of eye candy in the bar; there was also a lounge area that we didn't get to sit in. The space is a lot like Harry's Tap Room or Boulevard Woodgrill -- any of the newish, mostly-interchangeable places in Clarendon that cater to suburban professionals.

Sunday, just read the paper, messed around with some kickballers in the park, bought some groceries, and cooked some chili. That was about it.