The Military-Cultural-Industrial Complex Redeploys Its Palette

I went into Target on Saturday to stock up on gum. I bought five 8-packs of Trident bubble gum. The cashier looked at me and said, "You must chew a lot of gum."

I gave her my best blank stare in return.

In addition to gum and Altoids (I also bought a 2-pack of mini-Altoids, since I needed a new tin to replace one that had fallen through a hole in my back pocket), I picked up a pair of Mossimo cargo pants in pre-faded poseur camouflage for ten bucks. They were a 32 waist, but they're supposed to be baggy and I figured I could boil them down a bit. If all else failed, I could cut them down into cargo shorts.

I wore them to work this morning. Since a 32-inch inseam enables me to clean the floors as I walk, I decided to cut them down to size. I didn't need a fancy hem, or even a clean cut, so I started with scissors and then ripped around for an authentic ragged edge.

Except on the second leg, the rip started to go up the leg, instead of around. I stopped as soon as I realized this, but I still spent the next 10 minutes stitching up the damage by hand: 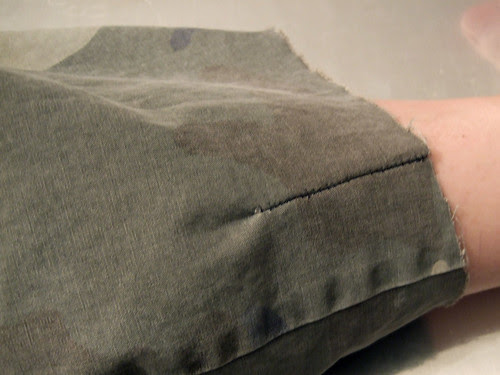 As I was working the needle, I thought about camouflage, and how it's changed since I was a kid.

Growing up in the latter days of the Cold War, the military was green and black. Soldiers wore green camouflage for the fields and forests of Europe and the jungles of Asia and Latin America, and that's how they appeared on the news and in the culture.

Even fashion designers, when they appropriated military imagery (as they do from time to time), used the classic jungle camo color schemes.

Of course, that all started to change with the Persian Gulf War. Desert camo came into the collective consciousness, and stayed that way into Somalia, then Afghanistan and Iraq II.

Nowadays, when people think of soldiers, they think of shades of tan, brown and sand. Maybe one of those all-purpose digital camouflage jobs, colored for the desert.

It makes me miss the days when we only had to worry about global thermonuclear annihilation (mutually assured or not). It seemed much simpler.