So as I mentioned yesterday, after I got done filing my taxes, I stopped by the National Firearms Museum, which is at NRA HQ in Fairfax (right down the road from my CPA): 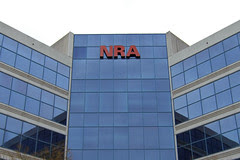 I've been there before, though not in the digital camera era. You can see my full set of 50 photos here.

The exhibits started to bug me after a while. And not for any political or ideological baggage -- it's a museum full of guns at NRA headquarters, so it comes with the territory. It's for other reasons [Update: A few weeks later, Philip Schreier of the NRA museum e-mailed me -- I posted his response, which addresses the issues I raised]:

* Aesthetics: The presentation for a bunch of the displays just... lacks. You've got a lot of glass display cases, relatively close together, and the lighting leads to a lot of reflections, and you've got layers of pistols in front of rifles and the like. All of which makes it really hard to get a picture where you can clearly see what's inside the case: 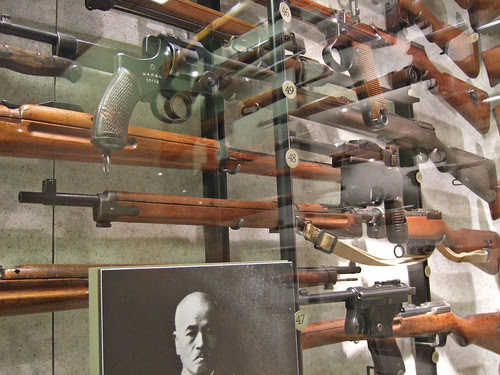 You can sort of see the WWII-era Japanese firearms here.

Since it's a relatively small space, I don't know what they can do, but a lighting consultant couldn't hurt. The reflection problem, for example, didn't seem quite as bad in the Marine Corps Museum (I still need to get my pics up from March).

Similarly, some of the older, rarer, and presumably more valuable items in the Old Guns in a New World gallery are in a kind of display bunker, which makes it really hard to get a good view: Okay, so asset protection is important. I get that. Then what about the diorama-ish window treatments in the Revolutionary War House display and Civil War Federal arms factory, that pretty much only serve to obstruct the view? 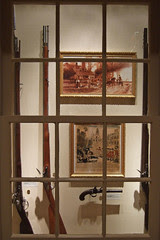 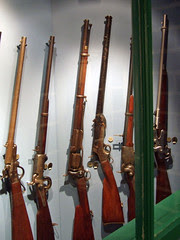 * Information Design: In some of the cases, the numbered labels skip around, so you have to hunt around to see what item is which. That's a minor annoyance, though, compared to the info kiosks that have the information on the bulk of the firearms. In order to find out what's what, you have to:

1. Get the number off the display case (which is pretty easily overlooked, since it's on a frosted sticker on the bottom of each case) and the tag number off the item, then...

2. ...go to the kiosk, which typically serves a bunch of display cases and is invariably a few steps away and out of view from the one you want: 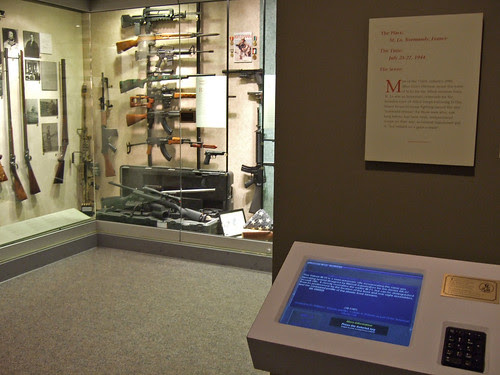 So you have to keep going back and forth from case to kiosk.

3. Not to mention having to key it in on a number pad that looks like it was pulled off a TRS-80, that throws a modal window if you try to enter a case number after the Num Lock key gets accidentally turned off (which shouldn't even be allowed): 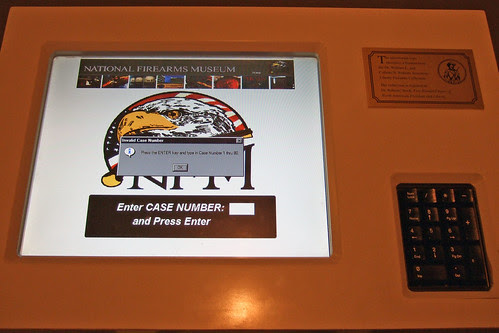 ...and that throws the same warning dialog every time the Num Lock key gets pressed (even if you're turning it back on).

Oh, and it runs on Windows -- I saw at least one kiosk that had crashed out to the desktop. (I didn't do it, but I didn't get a picture.)

Anyway, that's the whining portion of the program. A couple more of the more notable items: 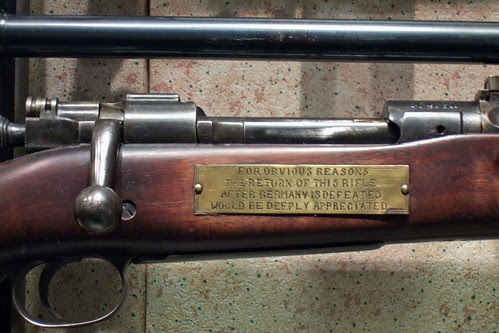 "For obvious reasons the return of this rifle after Germany is defeated would be deeply appreciated."

The story behind this rifle is here. 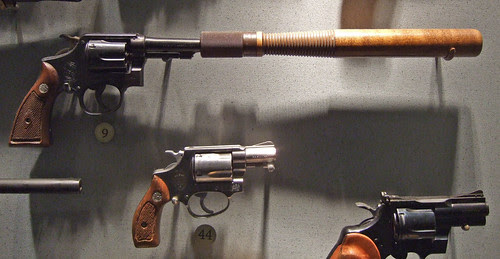 A strange billy club mounted on a revolver (the gun can be fired with it on), and some snub-nosed revolvers.

A closeup of assault and sniper rifes: 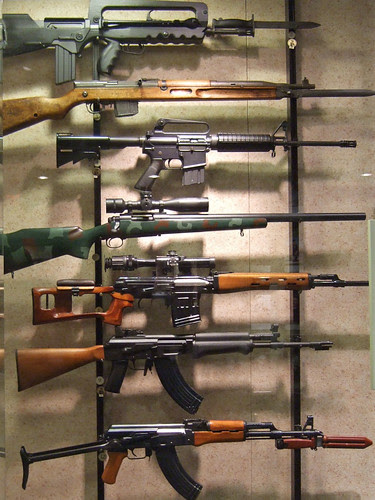 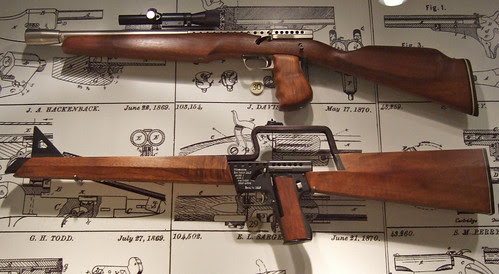 Gyrojet carbine and rifle, which fires a mini-rocket projectile and was also mentioned in the James Bond movie You Only Live Twice.

Some sort of prototype: 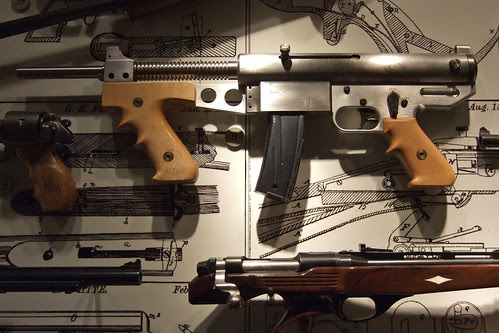 And of course, a competition target rifle wrapped in duct tape: 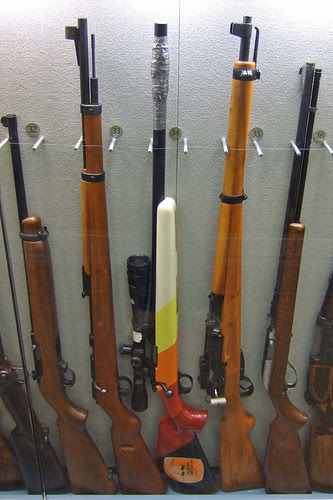 Apparently the shooter needed to jerry-rig some counterweights with lead wire and duct tape and decided to keep it like that.

So that's it. See the rest of the photos here.

just by the way, that AK stock is a fold over (upwards) style, which prevents some of the rocking effect when firing, though not that much. Good pics though, just for the average Marine like me looking anyhow.

Mavrik -- thanks for the comment; not to be contrary, though, but I'm positive that it's an underfolder (it could be Yugo or Polish, not sure); here's an example of the Yugo underfolder (with synthetic furniture).

Also, speaking of Marines -- I have a set of pics from the Marine Corps Museum at Quantico that I took last year and still need to upload. FYI.

In the interest of being correct, none of the rifles you have pictures of are "assault rifles" They are merely full auto, which often times has been stigmatized by liberal media as "assault" rifles to evoke an emotional response from the viewing public, and creating a misnomer. An assault rifle is a barrage device that can utilize a rifle to fire a grenade, some sort of other ancillary projectile besides the primary projectile (bullet). Most anything can be an assault weapon, and classically only siege weapons were "assault rifles" The term however has been diluted to any weapon, or in this case rifle, that is capable of assault.

You are however correct, the Ak47-s, aka an AKs-47, the stock folds downward, under the grip and trigger group, resting under the fore grip.

Chancellor - Hey slick, don't try to out-pedant a pedant -- an assault rifle, as traditionally-defined, is a select-fire long arm that fires an intermediate cartridge. The rifle grenade definition you invoke could apply to any select fire main battle rifle that can launch a grenade -- which is all of them (e.g. 7.62x51 NATO arms like the M-14 and FN-FAL).

On the other hand, as I think you tried to note, the term "assault-style" has been applied to any semi-auto long arm that has defining characteristics such as pistol grip, barrel shroud, detachable box magazine, folding stock, bayonet lug, etc.

Joe, A pendant can never out-pendant a pendant, for surely both pendants seek perfection in the pure essence of their personal being, and do it to the best of their abilities, and be unconcerned with another's attempts.

As your Traditional definition states, any select-fire long arm that fires an intermediate cartridge, is an assault rifle. By that definition, nearly every weapon in the NRM, National Rifle Museum,(not the NRA Museum FYI) fits that description, considering that every rifle has safe as a fire mode, it is select fire. Furthermore, and intermediate cartridge is a very vague term, and could be stretched into nearly any context. I won't into any further detail there but instead move onto my next point.

The grenade definition I have invoked, is clearly a better, and more fitting, classical definition.
While a few rifle grenades were merely bore sized sticks screwed onto hand grenades, and could be shot out of nearly any firearm, notice I do not disqualify pistols from this category, most any, majority and the best functioning rifle grenades required some sort of barrel attachment or adapter to accommodate the extra functionality of a rifle grenade, effectively turning it into an assault weapon, specifically an assault rifle.

Back to the stretching of the "assault-style" term by the media, mainly the liberal media, I feel like you have grasped that of which I spoke. Furthermore, you give the media far too much credit for thinking that they clearly used the term "assault-style" weapon/rifle /whatever in their coverage, as I can assure you that they did not.

The term assault weapon came about from new age warfare where siege weapons no longer worked, and the affixed tools allowed one to make an "assault" on some embankment or installation the enemy occupied, and effectively became a force multiplier. It has since become stretched through the media into common vernacular to be abreast of the legal team "assault" as in "assault and battery" This could not be further from the truth, and this is why I felt I needed to step in, and show some expert knowledge of the topic, and perhaps enlighten a pendant, furthering his quest to becoming a truly better person.

Ah, I see now. You like making stuff up, and you get paid by the word. Got it.

Perhaps it is possible to out pendant a pendant... Or pseudo-pendant...Owned?

The folks in your flickr account telling you that the AR is an M4 are mistaken. Notice the slick side receiver, the lack of a forward assist and lack of a shell deflector. I do not see an autosear pin on there (although it's kind of hard to tell) I think that's a Colt SP-1 Carbine. That is also indeed a Valmet M76 and the one on the bottom is a Chinese Type 56-I. You can tell by the hooded front sight, the lower (centered on receiver) front rivet on the front trunnion and the bayonet sheath (unique to the T-56). The Chinese and the Romanians were also the only ones to produce a stamped receiver with a folder that locks down at an angle like that. I need to make it back to that museum some day.