"You guys see anyone beating up a woman?"

I'll get to the boring skate report segment in a second, but the end of the skate was really... odd.

I was unstrapping my skates in the W&OD parking lot at Route 28, when this Loudoun County Sheriff's cruiser goes screaming down the road. I didn't think anything of it, until suddenly I see him pulling into the lot in front of me.

Either I really wasn't paying attention (which is possible, since my feet were killing me), or he flanked me from one of the service roads.

I play it cool. I know that I haven't done anything that they can do me for (unless being really out of shape and pretending to be an Internet tough guy using quotes from 'The Usual Suspects' are crimes -- the former isn't; the latter should be.)

There's a guy at the car next to me, putting the front wheel on his bike. The officer asks us:

"You guys see anyone beating up a woman?"
Urm, no.

Apparently, someone had called 911 reporting a man beating the crap out a woman in the parking lot.

We were the only people in the lot, and we each had only been there a few minutes, so who knows what had happened.

Up to that point, it had been a relatively normal skate. It was really nice out -- sunny, just under 90, dry air, so nothing at all like last week. I did the usual thing and parked at the Route 28 lot and headed west.

One annoying thing was that I had Junkie XL's 'Metrolike' going through my head. It starts out with kind of a cadence that sort of matched my skating rhythm.

It's kind of distracting when you're exercising.

Yes, I spent 10 minutes making it scan and rhyme.

Speaking of hills, the Route 28 overpass has a nice little slope to it; if I'm parked in the lot, I will finish up by going up and down the hill a few times: 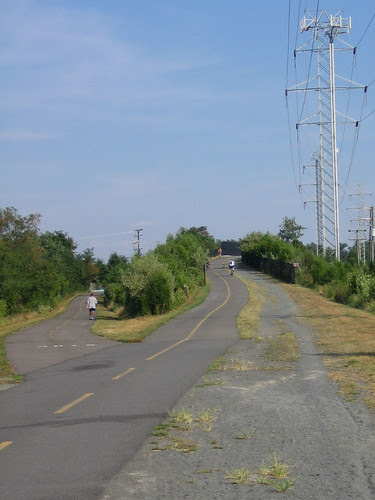 And then doing a speed run going downhill: 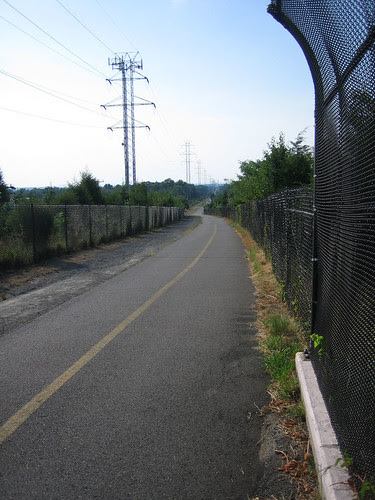 There's room for a dozen strokes to build up speed, with a nice, long rollout as long as you don't hit any rocks or people coming in from the parking lot.

If you ever see an idiot on skates in a full tuck, cannonballing down the hill, that's me. It's a good finish -- it lets me pretend I'm fast.