The Universe Is the Size of My Two Fists. (And It's Going to End in 50 Years. Maybe Less.)

I'm having a real tough time with death. Not the abstract concept of death, or any deaths that have happened recently (although I can't say that they've helped things any), or even your impending death.

I have a problem with the idea that I'm going to die someday.

Specifically, I really don't like the concept of not existing.

I don't mind so much that the sum total of my being, my memories, knowledge and experiences are just one day going to be gone. There are a bunch that I wouldn't mind losing, and besides, I can always get new ones. Except I can't. That's the whole problem with death.

Nope, can't get my head around it.

Look, the universe really is all about me. You may think it's all about you, but you're wrong.

Everything that happens in this universe boils down to what gets to the 2 pounds of wrinkled meat, about the size of my two fists, that sits inside my skull.

That includes the bit where you're saying, "Geez, I didn't realize he was such an egomaniac."

It's one of those "If a tree falls in a forest..." things -- if the world exists, but I'm not there to experience it, does it really matter?

I'm still not entirely convinced that the world doesn't stop functioning when I go to sleep. Or that the 180 degrees behind my immediate field of view isn't just a blank space until I turn around.

When it comes to the idea of an afterlife, I'm not optimistic. I definitely think that organized religion, more important than maintaining social order or explaining why things happen, exists to keep us functioning, when we really should be curled up into a little quivering ball because we asked "What happens to us when we die?" and didn't like the answer we got.

I guess the only thing that keeps me from teetering off the utter edge of despair and gibbering insanity is that the confluence of events and circumstance that have led to my conscious existence is just so utterly ridiculous, that the idea of my continued existence after death isn't that much more so.

Some people have this romanticized notion of death as drifting off to a welcoming sleep. These people haven't thought things out very well. For starters, the thing about sleep is that you wake up.

Can you conceive of nonexistence? The closest I can come up with is my disembodied consciousness, floating about in some utter blackness, thinking, "Gee, sure is dark in here," which pretty much completely misses the point.

There's a bit in Rosencrantz & Guildenstern Are Dead that pretty much sums it all up -- I quoted it wholesale earlier, but it informs a lot of how I feel, so I'll include it again:

Rosencrantz: ...Do you ever think of yourself as actually dead, lying in a box with a lid on it?

Rosencrantz: Nor do I, really....It's silly to be depressed by it. I mean one thinks of it like being alive in a box, one keeps forgetting to take into account the fact that one is dead... which should make all the difference... shouldn't it?

I mean, you'd never know you were in a box, would you? It would be just like being asleep in a box. Not that I'd like to sleep in a box, mind you, not without any air -- you'd wake up dead, for a start, and then where would you be? Apart from inside a box. That's the bit I don't like, frankly. That's why I don't think of it...

Because you'd be helpless, wouldn't you? Stuffed in a box like that, I mean you'd be in there forever. Even taking into account the fact that you're dead, really...

Ask yourself, if I asked you straight off -- I'm going to stuff you in this box now, would you rather be alive or dead? Naturally, you'd prefer to be alive. Life in a box is better than no life at all. I expect. You'd have a chance at least. You could lie there thinking -- well, at least I'm not dead! In a minute someone's going to bang on the lid and tell me to come out. (Banging the floor with his fists.) "Hey you, whatsyername! Come out of there!"

There's also the mass grave screen from Full Metal Jacket, made all the more haunting by Matthew Modine's flat delivery: 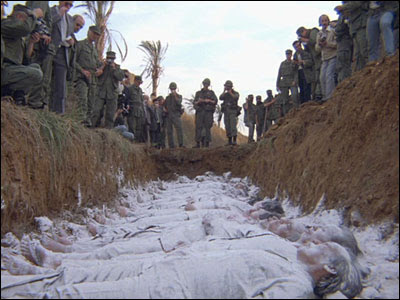 The dead know only one thing: It is better to be alive.

I'll spare you the 'Our Town' reference.

I have no illusions that this is anything but your mundane, garden-variety existential crisis. Self-awareness is a burden, as is the knowledge that everything we do, from having scads of meaningless sex (of which we've previously established I'm not very successful at, but honestly, wouldn't mind a little more of), to making a difference in other people's lives, to having a family, to leaving any worth of historical legacy, are just distractions from the fact that we are all going to die someday, and there's absolutely nothing we can do about it.

Were you expecting some sort of happy, uplifting ending? This is death we're talking about.

When I was younger I would stop and realize I was lucky enough to be created. But what is the purpose? Still figuring that out and thankful for my chance.
My ex would just start crying at odd times becuase his parents will die someday.
No sense in worrying about it all... at least not right now. Just try and have fun.

Here's the thing: When you start thinking about "Why was I created?" or "What is my purpose in life?" you're really putting yourself on a pedestal. The fact is that none of us is particularly special.

There's six billion other people on this planet at the moment. They have thoughts and feelings the same as you, and every one of them at some point wonders about their purpose in life. Why are you or I any different than those other six billion?

As for religion, it was created only because we are the only creatures on this Earth aware of our mortality. Someone decided that this couldn't possibly all there is, that his life couldn't possibly be so meaningless that a single sabre tooth tiger could snuff it out.

Anybody want a beer?

"I don't mind so much that the sum total of my being, my memories, knowledge and experiences are just one day going to be gone."

Ah, but they are not going to be gone, because you...have...a...blog. Do you remember when you misbehaved in school and the principal said, "This will go on your permanent record?" It was all b.s., until blogs came along.

And to Lugosi I say, I met Red at the recent happy hour, and am happy to report that she is much more significant than a gnat.

Also, when the Sun explodes in four billion years, it's all going to be moot, so even that little comfort of a legacy (assuming the world continues to exist after I'm gone) is going to be a crispy cinder.

To say nothing of the heat death of the universe.

Lugosi, I think Joelogon means to ask what the meaning of human life is in general, not just his life specifically.

The problem I have with the whole, "What is the meaning to life?" query is that it's a loaded question, asserting that there must be a meaning to life. Even if we were created by some faceless, ethereal "supreme being" (whatever that means), there isn't a single legitimate argument to persuade a sane person to believe that this supposed supreme being is as it is described by some religious text.

As far as I can tell, all we do is spend our futile lives doing stuff we don't want to do (school, work, decaying in a nursing home, etc.) until we fall of the end of the conveyor belt into nothingness.

Anyway, I hope my commentary cheered everybody up!