Meet the New Vox. Not the Same as the Old Vox.

So, as I mentioned briefly, I went to a demo/meet-and-greet last Wednesday for SixApart's new social networking/blog thing, Vox.

I'm sorry, as a former MindVoxer, I can't help but giggle (and then cringe a little) whenever I hear the name "Vox."

It was at the Hotel Monaco, which is right by Gallery Place Metro.

Being the seasoned DC-area person that I am, I said "Tish-tosh" to the idea of switching from the Orange line and waiting for a Red line train at Metro Center, since Gallery Place is only a few blocks away.

That explains why I was drenched in sweat when I got there. And it was at least 10 degrees F cooler than now. At least I'd ditched my laptop bag.

Anyway, after a brief intro, there was about three minutes of SixApart founder Mena Trott giving the barest overview of the product: 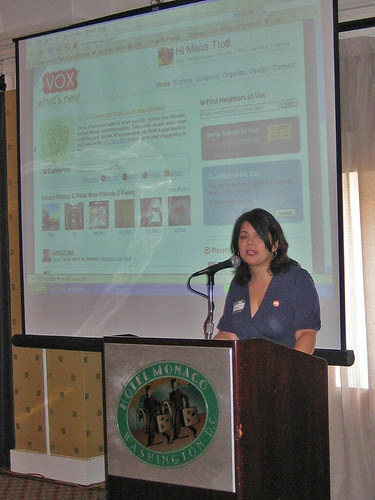 And the rest of it was the usual new media networking cocktail party.

There was beer, wine, cosmopolitans on trays, roaming waiters with appetizers and a nice spread.

After make the rounds a bit, I was hung with a few folks from the AIM team for a while. Then I said, this is ridiculous, let's go meet some people who don't work at AOL.

We approached a likely-looking duo.

One was a UI designer in the AOL Studio. Her companion worked for Revolution, which is practically AOL Mark II (a free-form jazz odyssey).

I gave up at that point and drank some more beer.

Anyway, during the course of the event, I talked with more people, including a guy from Discovery, more Revolution people, some of the Ogilvy folks who set up the event, and a few folks at SixApart with whom I'd had prior dealings over the phone.

There are more pictures here. I think that's me in the background of this pic -- right side, untucked white dress shirt, deck shoes with no socks. (You can't tell that no socks thing from the camera phone photo, I just remember what I was wearing.)

Also, I saw Mena Trott doing a video interview for something: 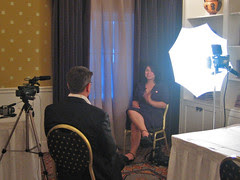 The party wound down, and I ended up staggering over to Arlington (I'd ditched my car and Metroed in) to meet up with some of the folks at the Beach Shack, so it was a pretty good Wednesday.

Lastly, "Revolution" sounds awful close to "Evolution", and as we know, Evolution Online (now Evolution Softworks) was the brain trust behind Mindvox, so there's another giggle, this one tinged with hysteria as I see the threads of my life circling around me, forming maybe a noose, or perhaps a net or cat 'o nine tails or something similarly foreboding and evocative.