I Did Not Egg the Time Warner Center Last Week

I finally got around to posting my New York City photos from the Monday after Thanksgiving.

I arrived at Penn Station and walked uptown. It was raining just enough to spot up your glasses, but not enough to justify using an umbrella. (Even though I make a game of it -- Umbrella Joust -- on crowded sidewalks: Get your umbrella above the oncoming umbrellas, and you win. Just like in the arcade game.) 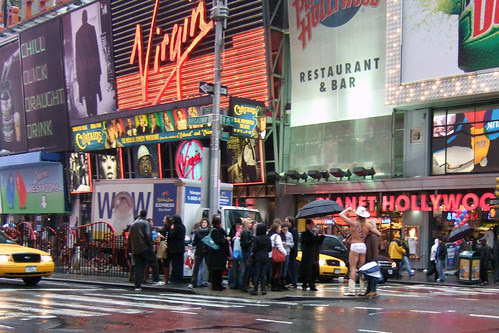 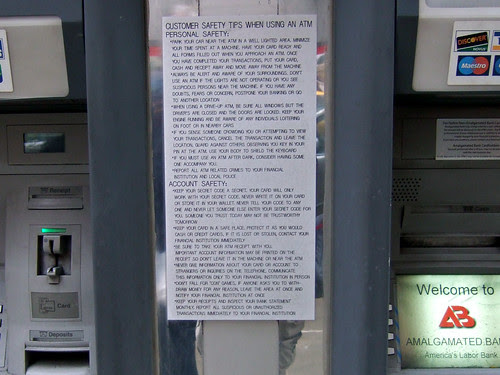 Sometime during the 10 minutes it takes to read this, your pocket will get picked.
I went up to Columbus Circle, past the Time Warner Center. (Contrary to earlier statements that may have been made by me, I did not have any eggs on me, nor did I project any of those non-existent eggs at the building): 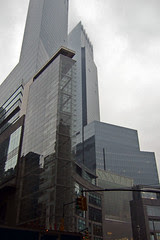 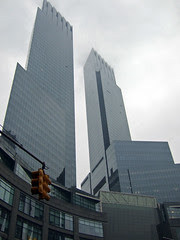 It was an overcast, grey, dreary day. I didn't capture the low clouds very well.
Walking along Central Park South, there was a film shoot of some sort in progress. Here's a dog wrangler: 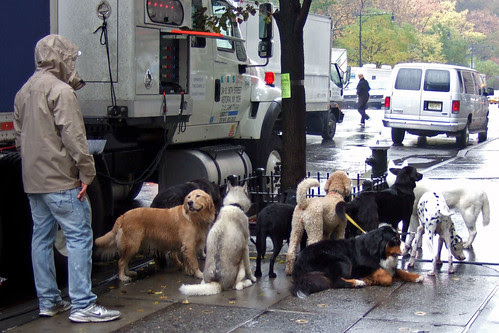 I first thought it was for one of the ubiquitous Law & Orders or something, but we later found out that it was for a movie, Two Lovers, with Gwyneth Paltrow and Joachin Phoenix.

I didn't see anyone famous, but there were these two guys feeding a parking machine around the corner: 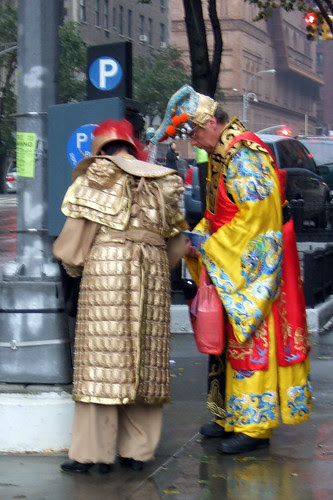 I don't know what the outfits were for, but they must be famous for something.
I headed over to the Parker-Meridien to meet t33p33 for a burger at the Burger Joint. Here I add to the growing pool of neon Burger Joint sign photos: 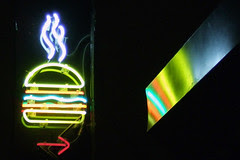 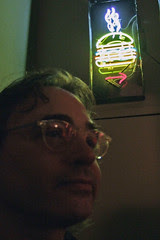 And then, after a 20-minute wait, we get to the burger: 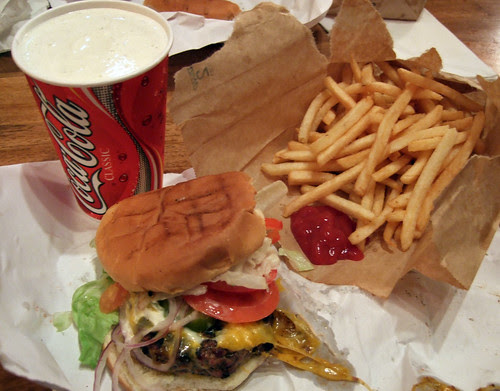 The cheeseburger was fine, though I would suggest a bit overhyped. As for the rest of it, the shake was solid, but the fries weren't very notable at all.

We also shared our table for a bit with a couple visiting from Sweden, then swung by CompUSA, then the mall at Columbus Circle to play with the toys at the Samsung Experience, then to get some coffee, where I saw a woman sampling aromatherapy: 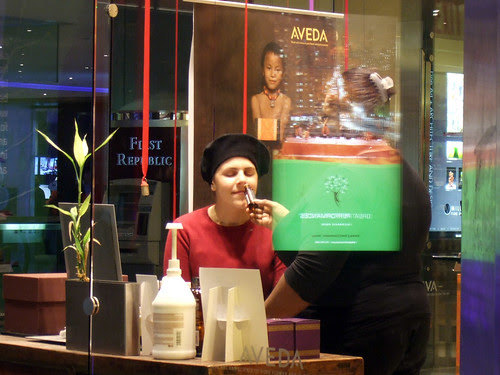 For some reason, I keep thinking, "Get your ass to Mars."
There was also a holiday light show. It's a very fancy mall: 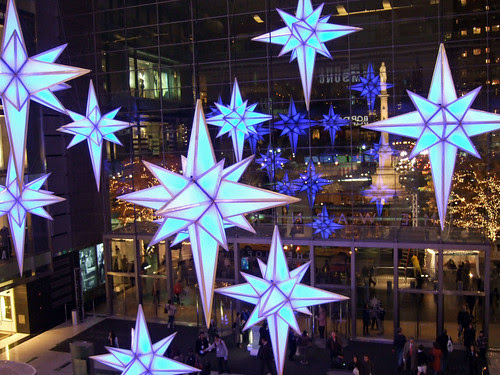 We then went to the Fifth Avenue Apple Store -- I didn't get any good pics -- after which I parted company with Paul and headed back downtown.

I thought this photo of the UNICEF snowflake and building (at 57th and 5th) came out pretty well: 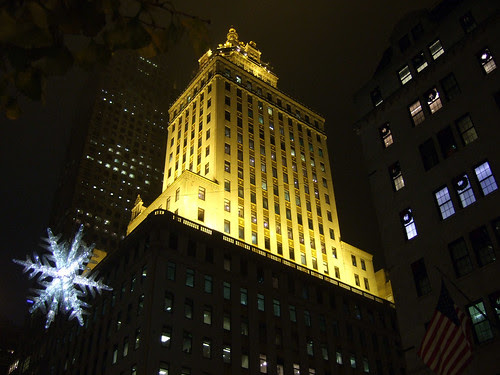 As did this closeup: 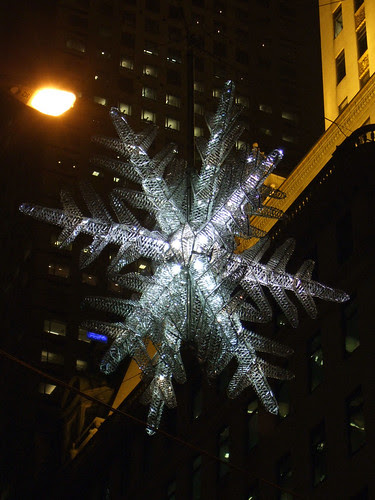 I walked back down to Times Square, to see how the lights looked in the mist: 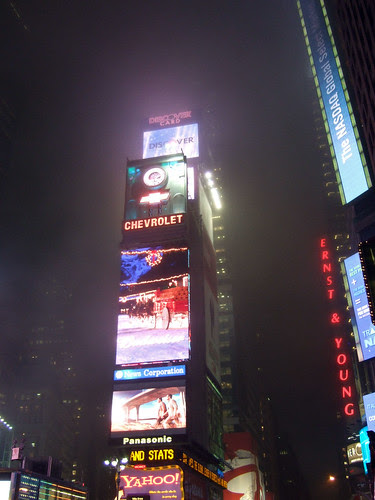 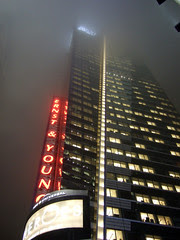 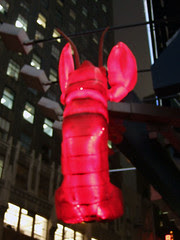 There was also a large red lobster.
After escaping Times Square, I went down to the Blind Tiger to meet my sister and some friends: 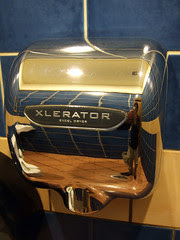 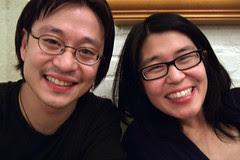 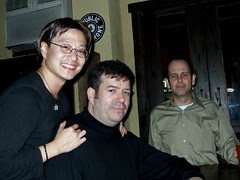 Me with various hangers-on and layabouts. No, wait, that's me.
We stayed there for a while, then went to a seafood place to get something to eat: 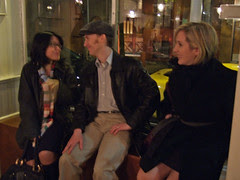 That was about it. There are a few more photos, which you can see in the full set.

On an additional note, I'm very happy to be up and running with Adobe Elements again, even if it is a little quirky compared to full Photoshop.

Dude. The lights in the mist look straight out of Blade Runner.

Hrm. You know, I have to say, I thought the same exact thing, but I didn't say it because I thought it sounded pretentious.

Pretentious?!? Not so much.

I love the first photo with the Naked Cowboy. I sent the link to someone I know in NY and she was amazed you were able to capture him.
I wanna print this out have you sign it and frame it I love the colors.

Red: Well, the Naked Cowboy doesn't exactly shy away from attention, does he. And thanks -- I was going to do a closer crop of the photo, but I liked the hustle, bustle, and colors (especially on a dreary day).