Besides, I understand the need for cost cutting, and even moving from the Air & Space Museum to a venue from an earlier era (Westfields Marriott), but having it on a Monday night, from 6:30 to 9:30? (And "business casual," to boot.) It hardly seemed worth the effort.

But, it was going to be the first one that I missed in over a decade (well, other than the one that Jon Miller canceled in... 2002? to send another cost-cutting message). And, I had a late offer that I couldn't refuse. So I went.

I hadn't been to Westfields in a bunch of years, and the intervening time had seen some new overpasses and developments, including the Sully District police station, where two police officers were killed last year -- it's right down the street.

Despite the evening rush hour traffic, we got there early -- after all, three hours isn't much time to have to worry about lines, parking shuttles, and such nonsense. So we had to wait a bit to get in.

The tree in the lobby was pretty nice: 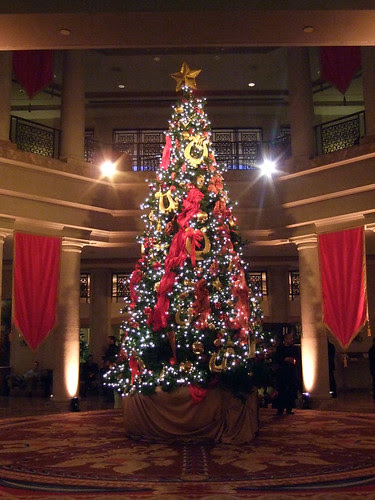 Things picked up pretty quickly, as these short events tend to do. It wasn't as elaborate as prior years, but it was still pretty nice, and to be honest, I was never a big fan of the stilt walkers, celebrity impersonators, and all that jazz.

I mean, they could have had it on the AOL campus and I don't think anyone would have cared, as long as there was food and an open bar, but I guess there aren't any kickbacks in that. (Note: Any mentions of kickbacks are purely speculative.)

There were a couple of bands. One of them was a country duo: The bars were plentiful and open, which is always nice. I had to slow down after a couple of drinks -- not because I was worried about making any career-limiting moves (ha), but because I wanted to stay upright.

It was also interesting to see the varying interpretations of "business casual," which ranged from evening gowns, to a few ensembles that were a half-step removed from sweats.

I saw a lot fewer people than I'd hoped -- a Monday night, plus an October and December layoff will probably do that. I saw a few fellow involuntary alumni, some of whom had gotten back in (presumably in moments of weakness or inebriation).

Some folks were surprised to see me (not quite, "Who let you in here?"), though I wouldn't say that anyone was dismayed or horrified to see me.

I have a few people pics that didn't come out very well, and I didn't get a shot of the lady on roller skates handing out blinky rings (she was a big hit), so I mostly ended up taking pictures of the damned tree: 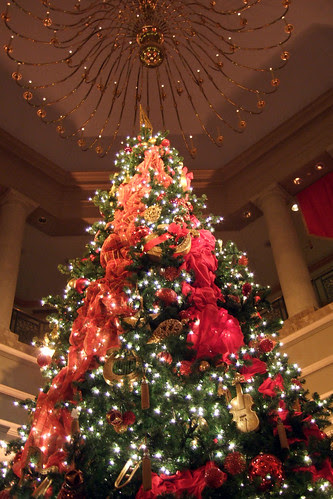 As predicted, they were pretty prompt in getting us out of there at 9:30. Though it took Rover from The Prisoner to get us stragglers out at 10: 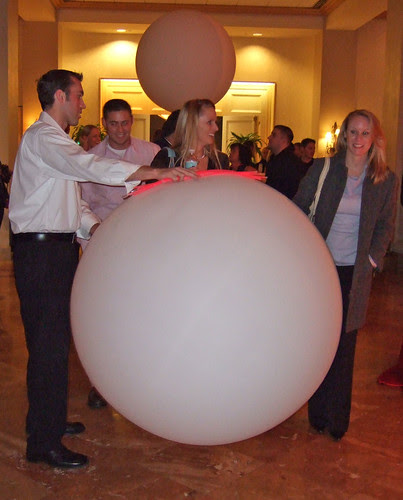 "I am not a number! I am a free man!" Seriously, unless you're driving a conversion van, what the hell are you going to do with it?
We hung out in the hotel bar for a while, then moved to the nearby Blue Water Grille to hang out some more.

That's about it, other than to say I was looking at the AOL entry on Wikipedia to look at some dates, and note that some self-promoting clown calling himself "The Untouchable DJ Drastic" seems to have added himself as a "Notable person associated with AOL": 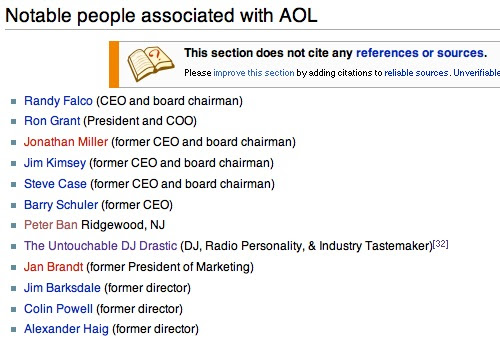 I wouldn't call "Peter Ban" particularly notable, either.
Hey, AOL has come down a lot since its heyday, but I don't think they're quite that low yet. I'd remove it, but I guess I still don't see myself as having a neutral point of view.

I was hoping it would be as great as last year (at the Air & Space Museum) and it came pretty close considering it was on a Monday evening. Hahaha, AOL Prom - somehow that fits.