Nuke the Whopper Freakouts -- It's the Only Way to Be Sure

Consider this an early New Year's Resolution -- after extensive thought and through analysis, I have come to the conclusion that every "actual customer" who was upset by the purported discontinuation of the Whopper sandwich needs to be beaten thoroughly about the head and neck. And I'm volunteering.

Furthermore, anyone who was stupid and/or fame-seeking enough to actually sign the release to appear in the Burger King Whopper Freakout commercial needs to be stopped. By any means necessary. 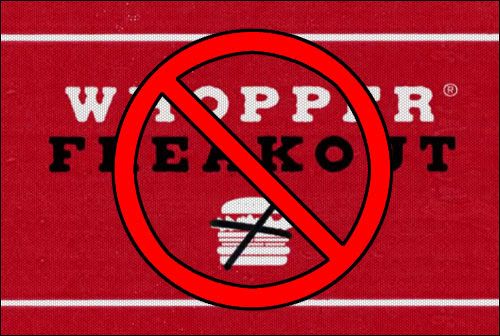 Stop the Whopper Freakout.
Sure, we all have our tastes and preferences, but if a fast-food chain hamburger means that much to you, you need to be put down with extreme prejudice.

While this may be a master stroke in quasi-viral marketing, I can't watch, or even listen to the commercial, lest I get overwhelmed with rage and disgust.

On a side note, I see that the fake manager of the store is Regan Burns, formerly the host of the game show Oblivious ("The game show you don't even know you're on!"). Guess he doesn't mind getting typecast in hidden camera shows.

I actually kind of liked Oblivious, not least of all because their gimmick allowed them to pay out what was probably the smallest cash prizes out of any game show, ever.

Looking at Mr. Burns' IMDB entry, I see he was also involved in Fox News' alleged news-comedy show, The 1/2 Hour News Hour, so he must be used to projects that aren't funny and inspire loathing. Though I understand that an acting gig is an acting gig.

I had never seen that clip. I can't stand that silly big-headed king in their commercials. The Whopper is my husband's favorite burger, by the way. Although since his heart surgery, we don't do fast food burgers much... and when we do, it's at McDonald's for those $1 cheeseburgers. Can't eat cheaper than that!

My brother loves that commercial.

Good thing I was going to nuke Finland anyway.

I couldn't agree with you more, maybe you should run for president.