Wednesday was the December edition of the DC Blogger Meetup Group at RFD. I personally witnessed two unusual things that distinguished this meetup from previous meetups: 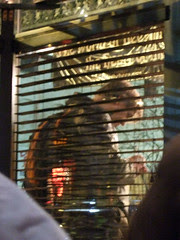 Not typical Meetup organizer behavior.
2. We had Night Vision capability: 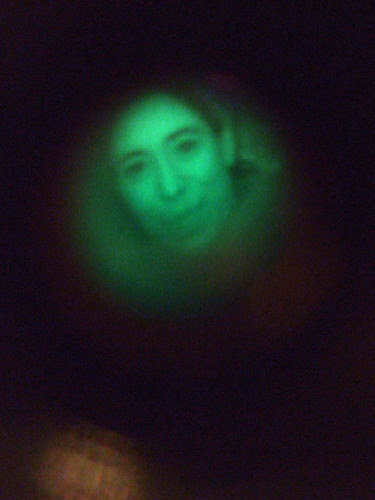 Photo taken through the night vision monocular, without benefit of an adapter.
The night vision came courtesy of Jadxia and friend Max (who isn't currently blogging, though he has Tumblr'd).
You can see more event photos by first-timer Andy Roth.

Also notably, we started to see more and more of a police presence outside: 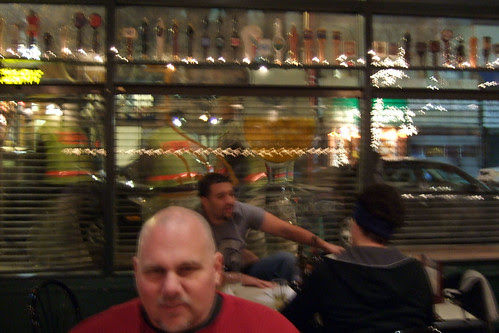 What's that going on behind John Croston? (More on that in a minute.)
For my own part, I seem to recall going on a lot about various blogging and social media things, so apologies to Ross, Shashi, Matthew Martin, not-yet-blogger Tommy, and anyone else I may have cornered if I talked their ear off (though we covered a lot of topics).

Oh, and I also had a grilled cheese sandwich, largely because of this Charlotte Harris entry.

What About the DC Holiday Cop Surge?As the night went on, we kept seeing cops going by the bar. Lots of them: 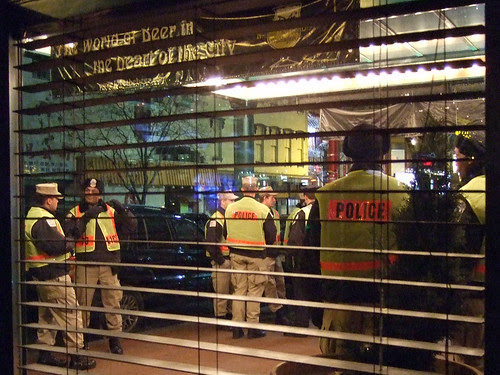 "Is there a problem, officers?"
At first, I thought they were just walking around a lot to keep warm, but once we got outside, we saw that were lot and lots of cops out -- walking around in groups of ten or more, circulating around the Verizon Center: 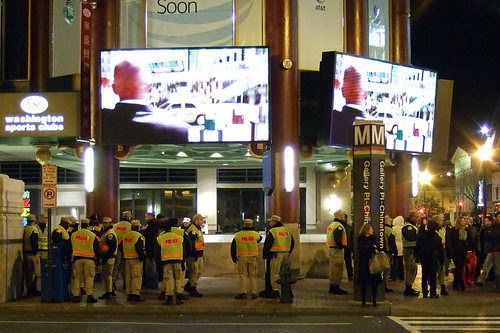 Evidently, the Starbucks was a popular focal point, which is kind of silly, since everybody knows that the triple murders in Starbucks happen in Georgetown: 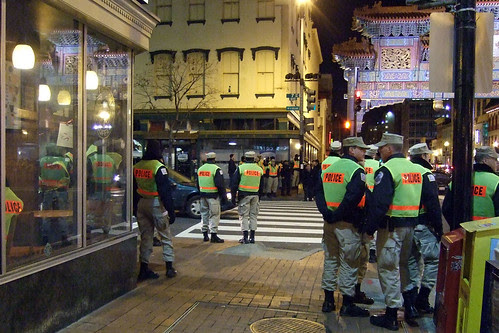 Forget about a cop on every corner: Try 10. Maybe 20.
As far as I could see, they were just tromping around in their groups of 10 or more, trying not to run into each other or the crowds of people leaving the Wizards game.

It was kind of pointless, though I was reminded of a video I saw at the Hirshhorn last year, which featured the British Coldstream Guards marching around central London (in full regalia and following certain rules so they'd gradually all meet up and march together). 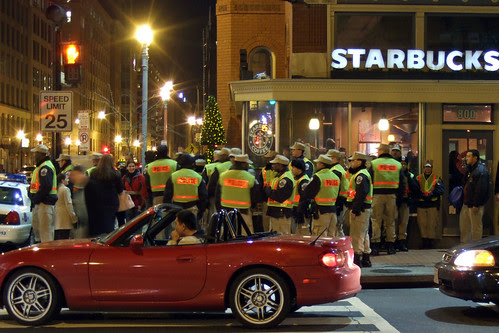 Note the reaction of the passing pedestrian in red.
Their khaki cargo pants and caps were very crisp and I didn't see any guns (though they did have reflective vests -- watch out!), so I asked one if they were auxiliaries or cadets -- he said they'd graduated but weren't full officers, so I guess they were probationary officers.

He also said there were about 250 of them that night, and it would last through the holidays. So I would assume that, once they're full officers and the holiday cop surge unpleasantness is over with, they can make their way over to the 2/3rds of the force that sits behind desks (barring any "all-hands-on-deck" weekends, of course).

Back to the HutAnyway, once I managed to wade through the cops (and boy, did I feel safe -- you know how rough Gallery Place right around the Verizon Center can get -- plus, since they were mostly unarmed, no chance of negligent discharges), I made it to Arlington, where I'd ditched my car.

I stopped in to Galaxy Hut for a little bit -- bartender Bill was back from his European tour. I ended up eavesdropping on some Brit guy looking for a cougar bar (which Galaxy Hut very much is not), then talking a lot of crap with two random guys -- one, a security guy for Fannie Mae, and his friend, a government contractor/spook-type.

And then when even I got tired of hearing myself, I went home.

(You can see the rest of the night's photos in the full Flickr set.)

After seeing one of those pics, I was gonna guess the cops were standing around watching TV.

Hope the grilled cheese was as crispy on the outside and melty on the inside as you hoped!

Man, I left too early.

CharlotteHarris: The grilled cheese was very nice, thanks.

Ross: Definitely not improv, there were a few real cops chaperoning them, and it was altogether too ridiculous to be comedy.