I know no one cares what I had for lunch, but I this combination is a little different (for starters, it is very brown): 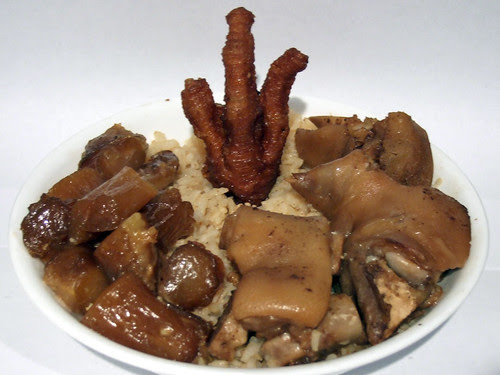 Beef tendon, chicken foot, pig's knuckles. Over rice.
I have to thank Mom for this particular combination. I brought all this -- and more -- back from home after Thanksgiving, and I'm trying to finish it before it walks away.

I don't have beef tendon all that often. It's very... chewy. And I can't say I'm that big a fan of chicken feet (too much effort, not enough payoff). But the pig's knuckles (a.k.a. pig's feet)... the way my mom makes them? Good stuff.

I don't eat it too often, though -- that stuff'll kill ya.
In other news, lots of folks are talking about the AP story on the report that says Washington Leads Metro Areas in Walkability. Ballston figures prominently, though I also enjoyed this quote:

"Leinberger attaches one major caveat to his report: The survey did not take into account the size of each walkable place. For example, midtown Manhattan is given the same weight as Reston Town Center, a lifestyle center outside Washington, even though the latter has only a tiny fraction of the office and retail space, residential units, and hotel rooms of midtown."

The only way Reston Town Center could compare to Manhattan would be if you limited the comparison to the Manhattan Mall.

My own particular pied a terre in Reston isn't really walkable (mostly because I am lazy), though that may change with the high-rises going up down the road (and if Metro ever gets out here).

The whole walkability issue is particular relevant when you look at the Tyson's Tunnel debate -- if the tunnel isn't going to be a viable solution (due to the need to secure federal funding), is there still a way to build walkable, high-density, mixed-use neighborhoods? I'm not an urban planner, but I'm hoping someone can figure out a way to do it.

I've all of those things before, but never on the same plate. Looks yummy, though.

As for the pigs' feet, I've kind of been turned off to them. Several years ago, a guy I used to work with would sit in his cubicle with a jar of pickled pigs' feet and a can of Dr. Pepper every day. That was his lunch, and every single day of the week he would eat it.

Am I wrong thinking that's a little insane?

Hrm. Whatever works, I guess -- there's a guy who's had a big mac & fries for dinner, every day for 30 years and he's pretty healthy.

These weren't pickled, though -- I guess it's closer to the Korean version.

I have known you for a long time, and I swear I do not ever remember you mentioning that you ate those things. Very ... interesting.

Gel-Man -- it never really came up. They didn't serve pig's feet at the Cambridge Inn.