16 Years Later and They're Still Doing the Unicorn Song

The last time I was in Ireland's Four Fields, I was throwing up in the bathroom.

It was the summer of 1991, and the bar was still known as the Four Ps. I was interning at the Pentagon and staying in American University. I was also underage and without a fake ID, so the people I was with snuck me in by distracting the bouncers with two of the prettier members of our group.

It was a pretty good night. I don't remember much of it.

Fast-forward 16 years to last night's year-ending DC Blogger Happy Hour. I'd originally planned on starting at MashMeet DC at Meze DC, but I got a late start, and it was also too damned cold to be trekking up and down the Red Line, so I just went to Four Fields.

Here are some our fabulous hosts: 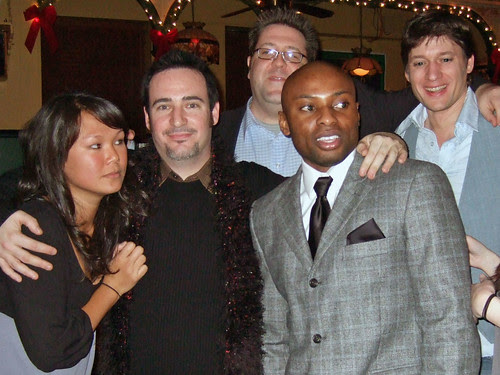 It was the only picture I took that came out.

As expected, the Unicorn Song was played, as well as other classic Irish pub staples, like Sweet Caroline.

It was kind of loud, though not crowded. I talked to a bunch of people. It was a good time, as usual.

thank you for the bday "present" in this post. :)

Happy birthday miss. (You make it sound so mysterious...) - Joe