Instead of posting what I really want to post about (which would be insanely self-defeating and self-destructive, and also I'm not drunk anymore), I will talk about the worst-named modern weapons system I can think of: The Standard Missile, manufactured by Raytheon: 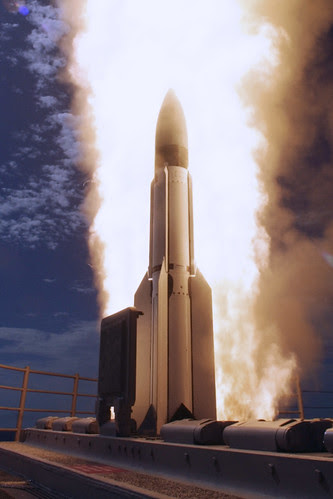 Seriously, it's such a bad name, that even the Raytheon underwriters' message spot on WAMU (or was it an ad on WTOP, I forget), where the very self-conscious tagline is, "there's nothing standard about it."

Of course, there are many connotations of "standard" that are complimentary (or that at the very least, don't suck) -- the standard by which others are judged; a naval or military flag. And, really, anything's got to be an improvement over the system it replaced in the 1960s -- the Tartar.

However, when I hear "Standard", I think: "What, was 'Adequate' already taken? How about the 'Meets Requirements'?"

I'm reminded of the ship name, "Reliant" (yes, the USS Reliant from Star Trek II: Wrath of Khan), for which the favorable definition of the word "reliant" (confident; trustful) has been long since overshadowed by its modern meaning, "having or showing dependence." (In fact, Websters online only lists the nonfavorable definition, "having reliance on something or someone : dependent").

It doesn't help that, to me, the other modern use of Reliant (if you can call the early 1980s "modern") was the Chrysler Reliant K, a crappy vanilla econobox that has an inexplicably favorable Wikipedia writeup. (Not being a Texan, I have no connection to Reliant Energy, a company which was founded in 2002, which is just inexplicable to me.)

Does anyone actually use "reliant" as a synonym for "reliable"?

Reliant is not a synonym for reliable. In its "positive" context it means confident or trusting - in something or someone else. So, I can be reliant on you for different reasons. Scenario 1: I have no job, no money, no income, and no means of support other than the money that you give me to live on. In that case, I am reliant on you for support.

Scenario 2: I am the coach of a football team. You are a capable and talented offensive co-ordinator. Because you always call good plays that help our team win, I am reliant on you to call the plays. That is the more positive or favorable meaning of the word.

In either case, if I am reliant on you, I am the one who is depending upon you. The reliant rely on the reliable, just as the dependent depend on the dependable.

Reliant is a stupid name for a company.