Say My Name and Save During Hurricane Preparedness Week (for Real)

This is kind of odd, but 100% confirmed and true: During Virginia's May sales tax holiday for Hurricane and Emergency Preparedness Equipment, May 25-31, 2011 (which ties into National Hurricane Preparedness Week), at Batteries Plus store locations in Alexandria, Fairfax and Manassas, say my name (Joe Loong, duh) and save 20% off anything except car batteries.


What in the World?

A few days ago, I posted 5 Quick Rules: Choosing a Flashlight for Your Emergency Disaster / Go Kit to the blog. Purely by accident, I realized it was also National Hurricane Preparedness Week, so I posted it to Facebook (my Notes import isn't working currently).

Jason Mitchell, one of AOL's original three webmasters, used it to plug the Batteries Plus stores that he owns and operates -- here he is below, in the right: 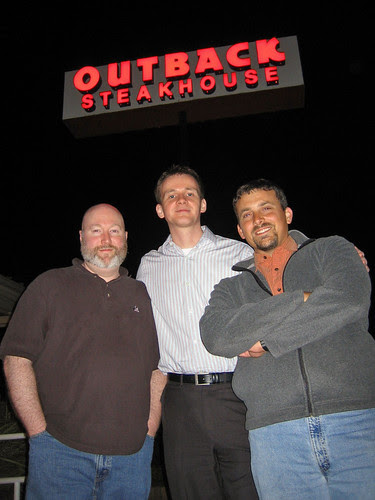 I asked Jason if he was doing any specials at his stores on top of that. Here's his response: 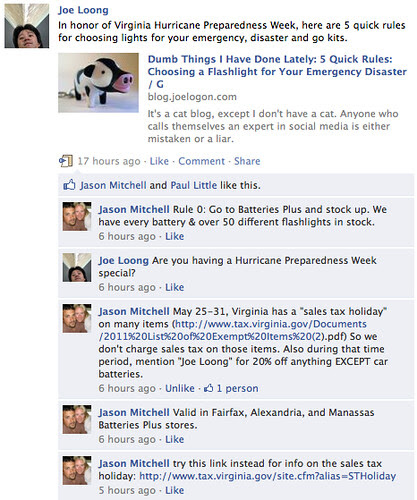 I confirmed via Facebook message that this is for real -- the discount is in the system and the employees at the 3 stores have been told.

So, my name is a saving word.

If you're looking for batteries or flashlights or other related disaster-preparation materials and you're in Virginia, go to Batteries Plus locations in Alexandria, Fairfax and Manassas, say "Joe Loong," and you'll save 20% off in addition to the sales tax saving.

Hey, Kathi -- good seeing you again. Hope all is well. Catch you at the next milblog conference?