The Rapture didn't occur. Or maybe it did, and we all got left behind. Or maybe we all got taken, and this is the best of all possible worlds.

The Scotch experiment, wherein I sought to change things around a bit and expand my palette by sticking to Scotch in bars, is suspended indefinitely. I was in such rough shape by Friday that I basically didn't drink (well, almost, at least not effectively), and instead cut out early (after walking out on my tab) and finished my second PhotoVenn, highlighting the Road to My Mullet: 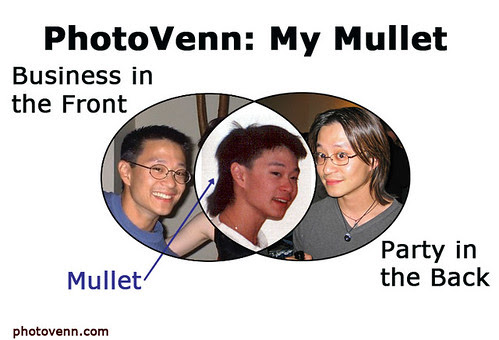 PhotoVenn: A photographic Venn diagram of my mullet: short hair pic from 2001; mullet from 1993, long hair from 2006.
Saturday, my car passed inspection without incident, and I went to a barbecue, where we toasted the non-Rapture at 6pm ET (though with some nervous laughter when the power went out), and watched the Preakness on TV.

I went home to take a nap (read: pass out), and was awoken at 11pm and convinced to go to the Reston Town Center to hang out with a visiting rugby team from Boston, at Jackson's and McCormick & Schmick's, which turned into something of a shit show (an opinion offered even though I was observing and not participating).

Sunday, went to the Town Center again for the arts festival, ditched when it looked like rain, went for a bonus workout and then when it got nice again, returned to M&S Grill for a workout-busting three-dollar-burger and some beers.

That was pretty much it. Did not get very far with the three goals of encountering more people I didn't already know, the alternate drinking regimen, or getting down to a hard-cut 130. There's always this week, though I can't say I'm really looking forward to it.