The Washington Post Gets Into the 2 Girls 1 Cup Business, Sort of

This weekend's Washington Post Sunday Magazine has a feature article ("Commando Performance") on the Humans vs. Zombies game at Goucher College.

Ostensibly as part of the education issue, it takes a look at the game, complete with some overwrought hand-wringing about quasi-militarism and Nerf guns on college campuses (*wailing* "ZOMG, gunz!" *teeth-gnashing*), especially as the anniversary of the Virginia Tech killings approaches.

Anyway, accompanying the article is a slideshow gallery with audio (Flash, with an unskippable ad at the beginning) -- I was going through it when I was amused to see that 2 Girls 1 Cup [wikipedia link] makes an appearance -- it's photo 38, about 2 minutes in (hit "Play Slideshow" to get the audio): 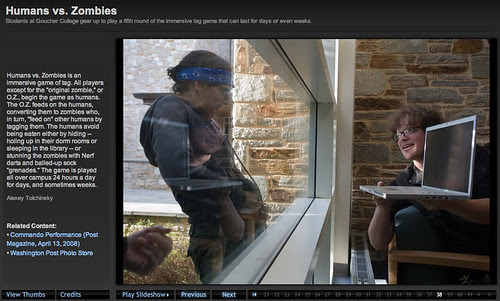 A couple of the humans are messing with the Original Zombie -- it's just a reaction photo, so you don't actually see anything (and I imagine the photo editors either got lucky or took particular care to obscure the screen), but you can clearly hear, "2 Girls 1 Cup... you like that?"

The photo is pretty harmless, but it's amusing to me since, in Pulitzer Prize-winner Gene Weingarten's column about 2 Girls 1 Cup last year, he couldn't even reference it by name, or describe it in any meaningful way (also see the related chat).
______________________

Also, not to pick on sheltered pointy-headed academics, but we've got a couple of real winners in the article, including:

"Jenifer Jennings-Shaud, a member of the graduate education faculty, spoke of arriving on campus one evening and seeing a man with a gun run over the hill. 'I was terrified,' she said. 'Guns scare me. Nerf guns, regular guns. All guns.' Then she began to cry."

I'm not trying to be heartless, but that speaks to a much deeper pathology. She might want to get some help with that.

Also, there's a quote from the Goucher associate dean of students:

"Perl continues to wonder whether she and the other administrators are doing right by allowing the game to continue. 'My worst fear is that an outsider will walk onto the campus and pull a real gun, not knowing the kids are using fake guns,' she said."

Apparently, Goucher College has a rampant problem of outsiders coming on campus armed -- shockingly, in defiance of the college's strict gun prohibition (as outlined in their College Handbook).

Or, another way of putting it, Associate Dean Perl is concerned that Goucher students are outgunned.

For two months I've heard about 'two girls, one cup' but I don't know what it is. My brother refuses to tell me what the video was about. Now I finally have a way to find out without actually viewing anything unpleasant - Wikipedia. I don't like looking at unpleasant videos or pictures so many viral videos completely pass me by.

Oh, that's just SICK! No wonder no one has told me what that video was about. Oh, I feel ill just reading that wikipedia entry. Now I have that burned into my brain and it will be days before that image leaves.

Yeah, I'm thinking that reading about it isn't much better. But at least you know not to look.