I'm still not much of a liveblogger, but we're still in the Twitter stump-speech portion, so I'm going to do a little catching up about PodCamp so far.

I got to Rosslyn slightly late, so I didn't catch the intro. From the Spectrum Center, we walked over to the Art Institute of DC (where the sessions are taking place) -- there was much video, utterzing and such en route: 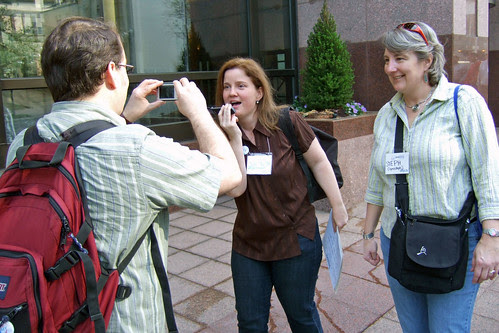 This is very social media meta.
[Andy Carvin is currently doing a live demo of utterz.]

I had a little trouble getting started because I couldn't find any coffee (had to go out to the Tivoli) -- also, there are no provisions for wifi, which is pretty baffling. There are networks in the Art Institute building -- we just aren't allowed to use them, so there have been a few ad-hoc hotspots set up, and intermittent coverage from the Hyatt down the street. 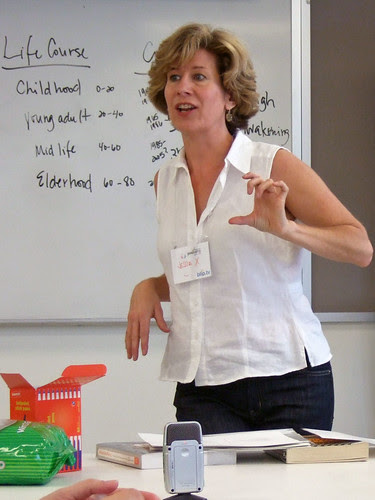 While I think there are definitely are generational differences when it comes to social media (And every other media. And technology as a whole), I'm not sure how useful the generational theory construct is. It's mostly my distaste for overly broad archetypes that marketers want to use as big hooks to hang people on.

The next session was a Podcasting 101 by Michael Domingo, whom I'd also met last night: 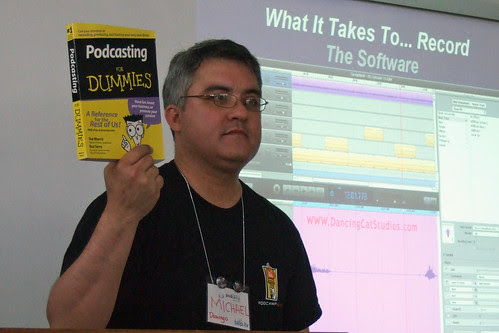 It was a pretty good session.

Okay, this session has pretty much spiraled out of control. And we're out of time.

Hi Joe, It was great meeting you at the pre-Podcamp party Friday night. I'm glad you came to my presentation, and I found your question (and healthy skepticism) helpful for clarifying some points.

You might very well roll your eyes at me for saying this, but your particular issue with generational theory *is* the classic GenX concern with the theory. Boomers (the Prophet archetype), for example, tend to feel skeptical about generational theory as they believe they are the only generation having an *authentic* generational experience. Millenials (Hero archetype) tend to believe that other generations are an ineffectual facsimile of their generation, and Silent/Homeland (Artist archetype) are sensitive to many perspectives and generations, as a concept, but need to hear from credential experts before agreeing that the theory has merit.

GenXers (Nomad archetype) tend to be skeptical about being put in a category for someone else's (such as marketers', as you say) purposes and manipulations.

Rock on, Joe. And I hope to see you around some more, online and in person.

PS - I didn't make this up. I'm just passing along information from generational theory, as articulated by William Strauss and Neil Howe. The info about why each generational peer personality has challenges accepting generational theory is from opening pages of their book titled, Generations.

Hi Jessie -- if I must hew to an archetype, I guess that's the one I would want it to be.

Nice meeting on Friday and thanks for your talk. -- Joe

Funny how it worked out that way, huh?