I bought 2 boxes of cereal. Then I bought a Wii.

After work today, I went and did a little shopping. Nothing special, just two boxes of cereal at Target (which was something of a face-saving device -- I went in with a vague idea that I needed something, but couldn't come up with anything).

Then, I went down the road to Best Buy, to pick up the DVD box set of Space: Above and Beyond. No problems there. Though I did spend way too much time ultimately deciding not to buy Dark Angel Season 1 for 20 bucks -- it was my way of being thrifty.

Congratulating myself on my self-control, I moved to the videogame console section, with the vague notion of buying a Wiimote so I could be ready to try some of the neat-o Wiimote hacks that Johnny Chung Lee keeps coming up with.

There were two Wii consoles. Just sitting there on the shelf. I was somewhat dumbfounded, but not so much that I didn't have the presence of mind to pick one up as I was making up my mind. (The other one went moments later.)

And there was a mind to be made up. I'm not that big of a gamer -- I can't let myself be, I know it would suck me in. But I ultimately talked myself into it -- if nothing else, I can always give it to my mom. (Hey, it could happen. And she's making headway -- we got her on Skype, so we videochat now.)

So I just stumbled into a Wii.

******************************
There's not too much else left to tell. With the perverse feeling that I was getting away with something, I went next door to the Harris-Teeter, where I saw someone speaking truth to power, in the form of a strategically-placed sign on a display of Miller Lite: 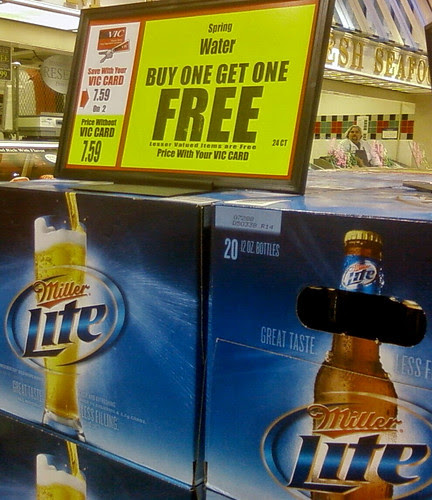 If Miller Lite is spring water, I'd hate to see the spring.

The spring water was actually at the bottom of the display, so I like to think it was someone editorializing about American light beers. (I drink my share of Miller Lite, so I'm allowed to say this.)

It also put me in a beer mood -- I picked up a variety 12-pack of Leinenkugels (Sunset Wheat, Berry Weiss, Honey Weiss, and Summer Shandy.)

I have to say, I'm pretty impressed with the UI, the ease of setup (the Internet config was a breeze), and how effective the Wiimote is for navigating around the screen.

I know all the gamer-types are preoccupied today with the new GTA release. But I'm happy to be on my side of the curve.

Sounds like you did some quality shopping. Cereal and a Wii. Both are tops on my list of fav things.

Space: Above and Beyond...wow. I'd almost forgotten about that series until I saw the word "tank" in the show description. Then it all came rushing back. Yet another quality show that got the axe and royally pissed me off. No wonder I blotted it out. LOL Dark Angel, another great one. *sigh* Any show I fall in love with is doomed, in my experience. If I like it, it's the kiss of death.