I was driving back from lunch and stopped at a red light on Reston Parkway, when I heard a loud conversation coming from behind me.

A guy in a white van in the left lane was talking to the driver of the car behind me. I couldn't hear what they were saying, but when the van rolled up to me and the passenger motioned to me, I figured they were asking for directions.

I rolled down my window and heard:

"Hey, you want a set of speakers? For your house?"
This, of course, is straight from the script of the White Van Speaker Scam. (If you haven't heard about it, it's pretty interesting to see how it works. The mechanism relies on people's greed for a bargain, as well as the desire to help someone stick it to The Man. See also.)

I just shook my head no and rolled up the window. I should have taken a picture of the guys, but I only got a crappy and useless cellphone photo of the back of the van: 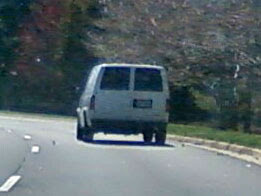 They moved turned in to the North Point Shopping Plaza, presumably in search of another sucker.

OMG, I've never heard of this before. And that's just creepy to have some random guys pull up to you and offer you speakers or any other furniture, equipment, services, etc.

This exact thing happened to me too on March 22nd. A large gold SUV pulled up to me at the Reston Home Depot. A couple shifty looking guys were inside, and one said, "Hey Buddy, do you want some speakers? For your house?". I've heard this same scam before, so I just laughed at him and said no. He called me a "F---t" and drove off. I called the Reston Police and gave them as much info as I could. Wish I had gotten the plate, but he drove away pretty quickly. The police were very interested in this and sent some officers out looking for them.

hahaha they've hit me up twice in the past three weeks here in Morgantown WV.

To the Anonymous person whose long-ass comment I just deleted: I appreciate the information about the scam that you're trying to share, but next time, please just link to the articles you're mentioning, instead of pasting the entire monstrously huge thing into the comment.