You think I am kidding about the mullet. Think again: 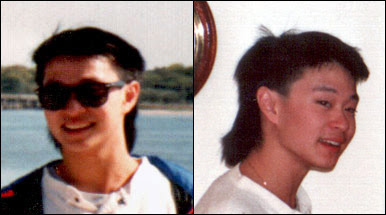 I wore contacts back then. The better to wear Wayfarers and show off the buzzed sides.
I was going through a box of old stuff when I found a bunch of my photos from the 90s.

A lot of the prints were stuck together. (Time and pressure, people.)

I'm in a more nostalgic mood than normal -- my birthday is coming up, as well as my 15-year college reunion next month. (I don't know if I'm going to go.)

If my high school classmates are any indication, I'm way behind the curve -- I should be popping out kids like a Pez dispenser by now.

Anyway, since it's approximately spring break now, I thought I'd scan and post some of my pics from Spring Break, 1992.

It was a fairly low-key affair -- more of a retreat, actually. That's what happens when two of your good friends in college are evangelical Christians. We ended up driving down to share a house with some other good, clean-cut moral types in Fripp Island, South Carolina.

After I got a fresh mullet touch-up at the campus barber shop, we got off to an even more inauspicious start, going the wrong direction from campus and making an unplanned stop at the Shearon Harris nuclear power plant: 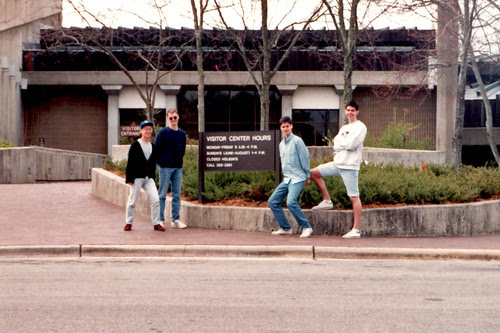 Me, Mike, Geoff and Jeff, in the time before GPS and Mapquest.
Here is probably my favorite picture of all time (even though I'm not in it). To show just how undebauched things were, I think this is the only beer we encountered that entire trip: 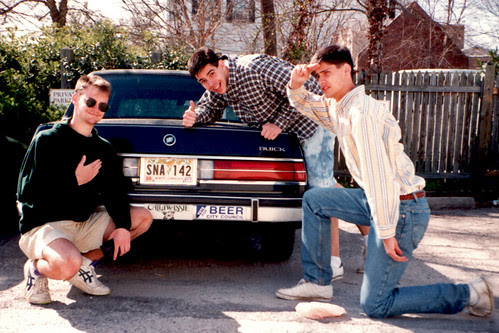 "Beer for City Council."
There was wackiness, though, in the form of a plastic Slinky: 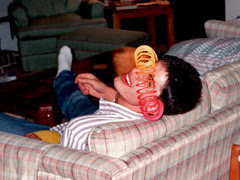 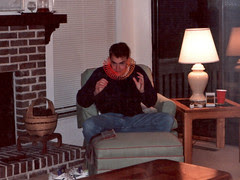 This is about as wild as things got.
There were also assorted side trips to the waterfront: 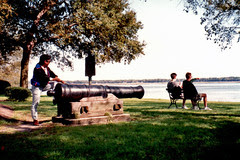 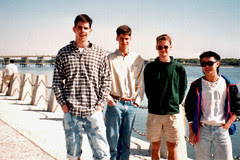 As well as a trip to a wetlands nature preserve-y type thing with a boardwalk: 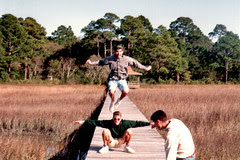 Leaping was the fashion of the time.
This is my other favorite picture -- this trip was the first fling in my self-timer love affair: 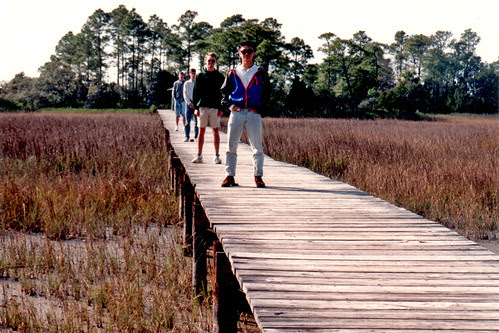 I still have the windbreaker and boots.
Anyway, I don't remember much else about the trip. I have no idea what else we did, other than it was disgustingly wholesome and disappointingly chaste. (Which is a polite way of saying I didn't get laid, though I wouldn't be surprised if that applied to the entire island. Including the deer.)

So I probably wouldn't consider it "fun" in the jaded now. But it was something to do.

Wow. That waterfront picture shows how ahead of the curve you were in terms of immense geekitude. I mean, flip it horizontally, and you've got yourself a freakin' cell-phone commercial.

As for turning 36, enjoy it. And, while it's true that the big four-oh begins to loom a little larger, you're still young enough to act like an idiot and get away with it. When you hit 40, plop down in a lawn chair and shake your walking stick at any kids foolish enough to step on your grass.

Aside from that, I'm afraid to look back on the 90's. There's just too much hair and stone-washed jeans back in those days, and no one needs to see that. No one... ever.

Happy b-day to you next month. I have to be honest, your spring break mullet pics are about as geeky/nerdy as one can get. But I won't throw stones as I have several pics of me huddling around tables holding 8, 10 or 20 sided dice playing D&D as a teenager.

Overall, it looks like your retreat was fun and will be a source of fond memories for many more years.

I'm about to list this post on DC Blogs (honestly admitting you had a mullet gets you points in my book). If you don't want to be listed on tomorrow's Blogs of Note, just say so by emailing me at Foilwoman at gmail dot com before midnight tonight. Thanks.

Dan: Credit/blame for that photo goes to random tourist-lady. The original photo was a lot more tilted.

Also, I think you've got your decades messed up -- 90s was flannel and grunge.

That mullet is awesome!

cracking up over all the posed pics... hope you sent a link to this post to all the dudes in the photos, you'll probably make their day!

The irony of course being that you guys probably had way more fun than those of us who went and got plowed and slobbered on at tacky clubs in Florida.

DCSportsChick: Mullets are back. At least, I've been seeing a lot more of them, including the rat-tail mullet variations.

Charlotte: I have to track them down.

Bird: I'm not so sure about that, though I could do without the tacky club bit of it, true.