The Raveonettes at the Black Cat, and a Look at Things That Are Upcoming

Saturday night, I went to see the Raveonettes at the Black Cat. I'd originally tried to make a bigger group outing out of it, but that didn't work out. Especially since the show sold out, and I'd selfishly and short-sightedly only gotten two tickets (and I'd only bought them Saturday afternoon, succumbing to nervousness and something resembling "experience.")

Actually, having that second ticket caused me some measure of consternation; it was simultaneously too much and not enough. Fortunately, Ryan ended up accompanying me, so I didn't end up having to scalp it (which had been a possibility at one point).

After some really bad luck parking, we finally made it inside while the opener was still playing. (Black Acid -- don't know much about them; not bad, though they seemed to be channeling a progression of styles.)

We settled in next to the sound board, where Ryan attempted to put the whammy on the sound guy, by gazing intently on a random section of the board until the sound guy adjusted it: 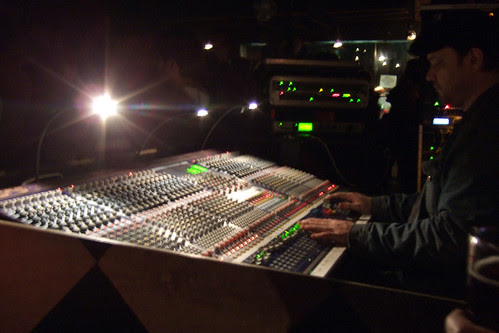 "My mind to your mind... your thoughts to my thoughts."

Then, the Raveonettes came on -- they split between playing previous hits and stuff off the new album (which I bought at the show). They were pretty tight and sounded fine.

I broke away at one point to try to get some photos -- unlike prior attempts, I only came away with one moderately usable pic: 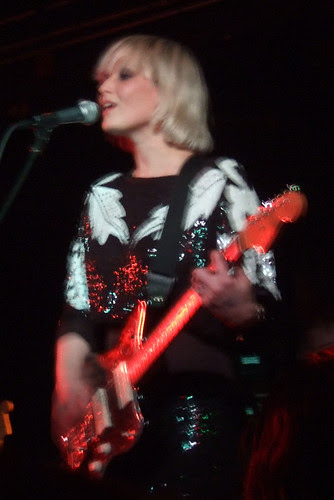 Sharin Foo
After the show, we headed back to meet up with some folks in Arlington, but by the time we got back, things had pretty much broken up for the night.

Oh, and after some discussion and a little research, I've come to realize that I'd had a mistaken notion of what constituted shoegaze music. I apologize for the (notional) inconvenience.

In other news, I had planned on replacing the bathtub faucet handles and spout this weekend -- bought the hardware, the tools and the plumbers grease and all -- but chickened out/got lazy/procrastinated my out of it. I'll get around to it eventually -- originally, I was just going to replace the leaky valve stems, but the hardware is really grody, so I figured it'd be worth it to just change everything. (Sure, I want to convert the master bath to a corner shower unit eventually, but one thing at a time.)

Things That Are Upcoming: Let's see -- Monday is Social Matchbox DC, which is right down the street from where I'm contracting in McLean, so I'll be there.

I haven't seen the cherry blossoms in a few years -- to be honest, it's looking like I'll skip it again this year -- we'll see what the weather and my schedule looks like mid-week.

Friday is Hirshhorn After Hours -- I haven't been to one yet, but it's on my list of stuff to do, especially since the Hirshhorn is my favorite museum.

Looking out a little further -- PodCampDC is the weekend of April 18th.

The Baltimore Kinetic Sculpture Race is May 3rd, and the following weekend is SkateDC. Which means I should probably dust off the skates now. (The "getting back in shape" bit of it is optional, though recommended.)

I also registered for June 13th's BlogPotomac. It's only $75 and it's at the State Theatre -- if nothing else, it gives me an excuse to visit the Beach Shack.

The days, they may drag, but the weeks and months just fly on by, don't they?