Only 2/3rds as Screwed as Projected

I'm taking a late lunch in Tarbouch right now, which is a Mideast/Mediterranean place on the corner of Lee Highway and North Kirkwood in Arlington.

It used to be a carryout place -- I'd stopped in a few times before, since it's right off the Spout Run I-66 exit, a convenient stop on the way to Clarendon. Over the winter they expanded it and fancied it up -- there's a restaurant section now, complete with hookah.

It's 4pm and there are three different groups of people smoking up now. It's a thin, sweet, fruity smoke, so it's not nearly as annoying as regular smoke.

Ah, my spicy falafel sandwich and chips are here: 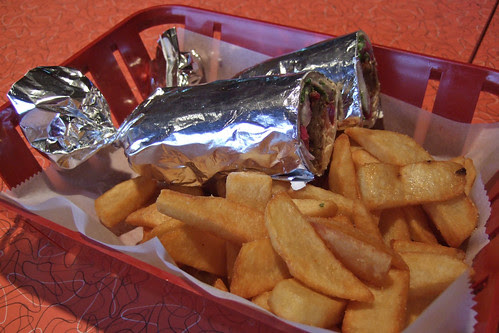 It's a perfectly serviceable and tasty falafel sandwich, but if I'd had my druthers (who still talks like this?) and easy parking, I'd prefer to spend my euros getting the full experience over at Amsterdam Falafel.

Anyway, following up on yesterday's brake situation -- I dropped my car off at the dealership this morning -- not the one I'd been to before, though -- I didn't want to go all the way into Arlington.

They diagnosed my car, gave me the keys to a loaner (a Mazda3) and I was on my way to McLean for work. A few hour later, I got a call and picked it up -- I probably still got ripped off, but only 2/3rds as much.

Okay, the smoke is getting really thick. Time to relocate to a coffee shop for a bit before I head on over to tonight's DC Blogger meetup.

"Taking" a lunch sounds so much more important that "eating" lunch. What did you dip your fries in, or did you eat them plain?

I am that important.

As to the fries, just a liberal coating of salt.