Ode to the Toy Tec-9, and a Humiliating Defeat at the Assassination Game

In my crazy gangbanger poseur entry, I used a toy gun that I've had for at least 20 years: It was made by Larami sometime in the mid-to-late 80s, and was very clearly modeled after the infamous gangsta favorite Tec-9 (Kurt Russell also sports one in the poster for Big Trouble in Little China): 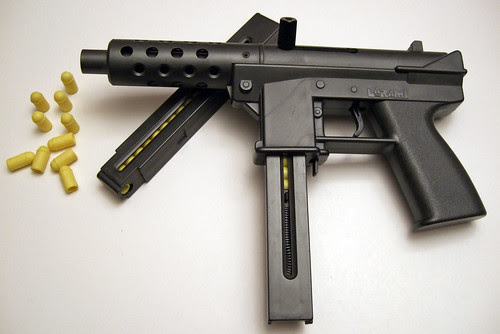 You can tell it's an artifact from another era, because it doesn't have a "Don't Shoot Me" blaze orange muzzle.

In fact, other than adding a Larami logo, you can tell that they just looked at the real Tec-9 design and toy-ified it, all the way down to the barrel shroud, magazine release, and cocking lever.

Here's proof: The toy shoots little yellow rubber "bullets" -- which just happen to be same size as a real 9mm cartridge (shown next to a spent shell casing for comparison): 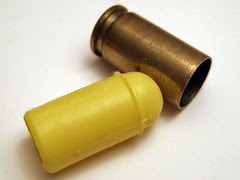 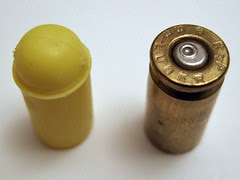 Confusing the two would be bad.
The gun is a bolt-action; you have to cock the handle with every shot. (Though you have to be careful -- the handle is pretty fragile. I gave one of these to a friend as a birthday gift, and he broke it off the first time he tried it. That sucked.)

The "bullets" were hollow rubber and the gun was air-powered, so they'd just sting a little if you were close. Also, you could use them as suction cups and stick them to your face. Though they'd leave a little hickey mark after you pulled them off. So you probably wouldn't want to do that, say, the night before you had to give a speech in front of the whole junior class because you were running for student council Vice President. (Don't ask me how I know this.) 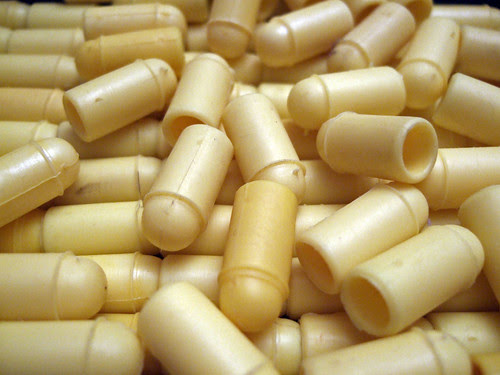 Closeup of the ammo.
Yes, in the 80s, we still played with cheap, realistic-looking toy guns, and relatively few of us got shot by police officers. In fact, I'm pretty sure I bought this in middle school or high school to use in The Assassination Game (Wikipedia calls it a LARP game -- ugh), though I don't think I ever brought it to school -- it was a little too unwieldy for that, and the fad died out for us shortly after. 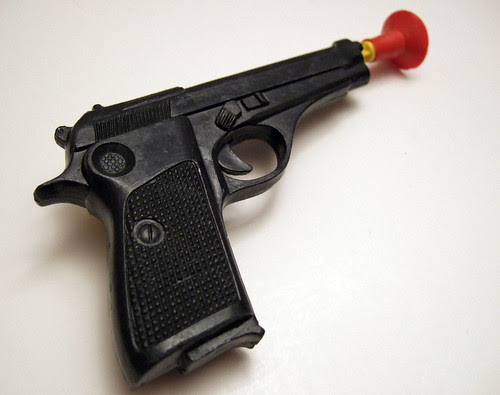 It's pretty small, even for my hands.

Of course, the concealability came at the expense of increased reload time. Which ended up costing me in a not-insignificant way.

I had two of these, and I had them on me at what could have been my greatest assassination game triumph, but what ended up being my most humiliating defeat.

My targets were twin brothers, Mark & Chris, so I rode my bike over to their house. As luck would have it, they were outside in the driveway, cleaning the trunk of their family's car (a classic diesel Mercedes Benz sedan).

In fact, as I walked up to them, they were both bent over deep into the trunk. I was maybe four feet behind them, and they had absolutely no idea I was there.

I calmly pulled out my two guns, one in each hand, John Woo-style (this was years before I had any inkling who John Woo was), aimed, and fired.

This is one of the problems with the two-handed John Woo gun-fu -- it's hard to aim, especially if you're kind of mixed dominant like I am. I ended up criss-crossing the darts.

In retrospect, I should have gone for the contact shot: pressed the guns into their backs and fired. I still kick myself when I think about it.

I'm not sure exactly what happened next. I probably tried to reload and fight, instead of doing the tactically sound thing and fleeing (they may have blocked me from my bike). The twins were able to get to their guns, and they got me. I had the perfect opportunity, and I blew it.

I still live with the shame.

Anyway, you can see the rest of the set here: Toy Guns: Larami Tec-9 and a Beretta Dart Gun.

(Incidentally, the rubber suction cups come off pretty easily, revealing the hard plastic tips beneath. I almost shot my dad in the eye this way. It would have been bad.)

This post reminded me of bringing one of these to high school to play 'killer' http://content.kapowwe.com/images2/1-1-327.jpg

I think I only killed an opponent with a rubber knife, though. I bought the farm from contact poison (vaseline on my locker- lame)

Mikep: I had another one similar to the one in your pic -- 6-shot magazine in a front grip (it was a pump action).

And the first time I played Killer (middle school, I think), I died in the opening minutes of the first day. Contact poison, just like you: a few guys who were out to get me put vaseline on my locker handle.

Yeah I remember that pump one. Actually, the guy who was supposed to kill me had that in his trenchcoat. He followed me into the bathroom, but as he was trying to draw it I got him with the "knife".

I remember these back in ~1985/6 I think... definitely middle school, right around the time when the movie Gotcha (with Anthony Edwards, aka Dr.Green from ER) was out... the one I had looked like a massive Blade Runner gun and it hurt like a sob when it hit. Wish I still had mine - unfortunately it was "lost" during shipping, or so my mom said. no luck on eBay.

Back when seat belts were sort of an unpopular fashion accessory, I was bouncing around the back seat with my toy 1911 with a super-cool hammer that could cock and it would go CLACK when you pulled the trigger.

On the highway in Houston, I was facing backwards watching the scenery flee away from me when somebody started tailgating us. I held that pistol up in the back window, cocked it, and pointed it at the tailgater.

You know, they opened up to a safe following distance amusingly quickly.

Vote for David: Yikes. It being Texas, wouldn't there have been an above-average likelihood of a real gun being pulled in return?

yea, my brother almost got shot by a police officer when he was seventeen for having one of those 80's-era pistols in his glove compartment during a traffic stop.

No one in my family complained when they soon thereafter changed the law to include the "I'm a toy!" orange parts.

Where could I find a gun like the fake Tec 9 pictured?

J. Alyce: If you want the original Larami, at this point, eBay is probably your best bet. You could also try Airsoft -- a spring gun would be pretty close to how this one works.

I, and all of my friends had these, and it had to be the mid-80s, but these had to be the most awesome toy guns ever. They had, as I recall, M-16, Pump Action Shotgun, a huge pistol like something I would have imagined to be Iraeli or Russian (don't ask me why, but it's one of the ones I owned, Tec-9, MP5 (i think), and a slew of others. I remember that all of my friends and I would save up just to buy one, and they weren't cheap by our standards.

I'd love to get my hands on some of these again. We had some of the best battles I can remember with these guns.

And your comments on the face hickeys are dead on, and took me back so quickly.

one of my friends did that all over his face, and then ran around showing every one how he looked like the guy from Hell-Raiser...when he took them off and had to go back to school the next day it was fricken hilarious!

Hey, any chance you have a spare "toy" tec-9 that you would like to part with? Doesn't have to be functional, it would be for a costume.

Are those tec 9 guns for sale? i've been trying to find them everywhere and couldn't find 1.

Where can I find one of these?

Hi -- I get this question every once in a while. Mine isn't for sale; I'd suggest looking for an airsoft Tec-9. If you absolutely need a Larami toy, I think your best bet is to set up a search alert on ebay and keep your fingers crossed.

@Neon, if you want the Larami Tec-9 it is available right now on ebay at this link hurry ends in just a few hours! http://www.ebay.com/itm/LARAMI-TEC-9-TOY-GUN-8-RUBBER-BULLETS-JACK-BURTON-BIG-TROUBLE-IN-LITTLE-CHINA-/181977022503?hash=item2a5ead0027:g:s9AAAOSwwPhWhG3Q