"A Reston woman armed with a pistol walked into D.C. police headquarters Thursday afternoon and attempted to take a guard's gun before she was wrestled to the ground, authorities said."

Now, there are several odd elements to this story. For starters, isn't it usually suburbanites who worry about crime being exported from the cities? But then we find out:

* The woman's name is Cynthia Nixon. Presumably, it isn't the Sex and the City actress. Although they're about the same age. I couldn't tell you anything about her -- the only relevant Web result for the Reston Nixon was a 5k race result from 1999.

* " The charging papers quoted Nixon as telling police that her plan was to 'rob a police officer of his weapon.'" This alone suggests all kinds of crazy, because:
* In addition to the gun and 36 rounds, she had two joints and two baggies of pot. Judging by her previous statement, this was probably for Phase II: Steal drugs from a narc.

However this particular episode turns out, it only adds to the growing body of evidence that Reston is hardcore. (Check out the Brandon Vedas story if you don't get the reference.)

To that end, I will show you what a vato loco I am, by mean mugging for all you civilians: 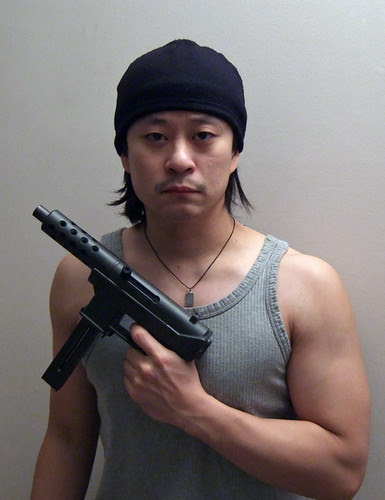 We gangbangers have poor trigger discipline.
Normally, for your typical MySpace gangbanger self-portrait, you have to be able to see the camera in the bathroom mirror. Also, my wifebeater is gray and not the usual white. But that's just how we roll in South Reston. 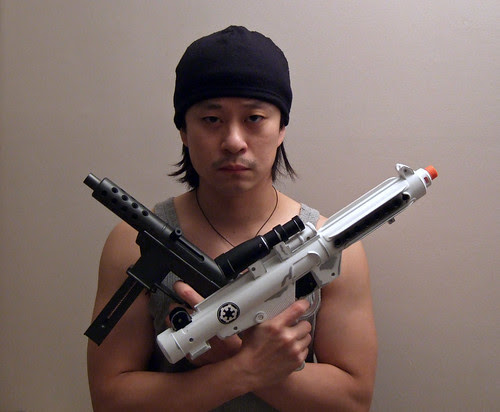 My Imperial Rifle Blaster does my talking.
Since we don't sacrifice accuracy for style, here you can see my slightly-modified gangsta grip (canted, not fully horizontal): 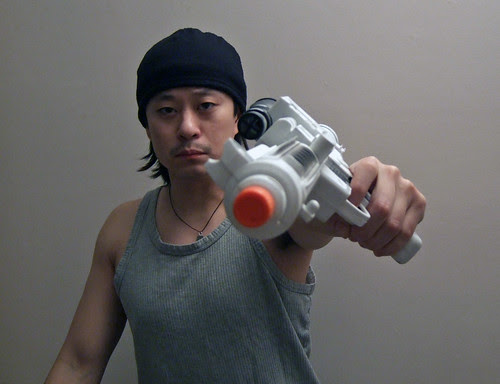 Note the extra-gangster orange safety tip.
The "Tec-9" is a toy, of course -- it was made by Larami about 20 years ago, in the late 80s, when life was cheap, and so were toy guns that were realistic enough to get you shot by cops (as opposed to the much pricier airsoft guns these days). The rest of the photo set is here: Mean Mugging With a Toy Tec-9.

Since I was raiding the toy closet anyway, I took a few more photos of the Tec-9 and its accessories, which I will post in a followup entry.

Why yes, I am feeling a lot better now: Yesterday was pretty bad in terms of overall sickness. I've over the hump now, but still wasn't well enough to go out. So here we are.

hmmm...so are we going to see these photos again next week on the news after a "disgruntled former employee" shoots up the CC1 cafe on the AOL campus...?

That's about as funny as that retar... "special needs" journaler who compared me to the Virginia Tech shooter.

Hee hee! Joe, you had me laughing so hard I was snorting...and I don't do that very often (thank goodness). :-D

Nice to see you're keepin' it gangsta, treal.

You gotta imagine me going through my feeds and I see you holding a gun to the reader. That's engaging.

Okay, now I am officially concerned. Not sure why. Just am.

ok, so I am just catching up on a few days worth of blog posts... and i am dying over here. yesterday, the awesomest thing i saw on the internet was the sarah silverman/matt damon and jimmy kimmel/ben affleck videos back to back. today it is joelogon gangsta pics.

Some of you guys are North Reston. We may be in a feud; I'll have to check and get back to you. If that is the case, you might need to check yourself before you wreck yourself.

I think many people immediately thought of VT, especially looking at the first photo. And here you are in the very same state!

Hrmph. Someone should have told Cho that the buzz cut look just did not work for him.

Also, I notice that someone posted a link to this entry to NOVA Craigslist Rants and Raves. I wonder if it was anyone I know.

Hey. I have been trying to find those suction cup dart guns for ages. Do you know what company sells them? I'm very serious. If you have information on them, please email me at johnnyaction14@gmail.com.

Thank you so much!

Sorry, no idea. Your best bet would probably be discount toy and dollar stores, though they probably come in colors other than black now.