Week-Old Stuff: A Primary, a Military Funeral, and a Valentine's Day Burrito

The Potomac Primary: Kucinich. Sure, he was technically out of the race, but never underestimate the power of the "shorter, older, dorkier guy/taller, younger, hotter gal (who's also a redhead with an English accent)" dynamic.

It was quite an elaborate ceremony -- Full Honors, if I'm not mistaken -- with an honor guard, a color guard, a band, a horse-drawn caisson, and a 3-volley salute (7 rifles, though that's not the same thing as a 21-gun salute, which uses cannon).

I took a discreet cameraphone photo after the ceremony ended: 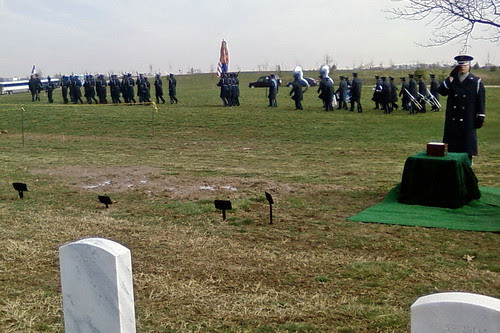 A guardsman salutes the ashes, as the two busloads of honor guard marches away.
[Obligatory "I am dumb" content: Luckily, traffic was kind, or else I would have been late to the ceremony. I had to try on three suits before I found one that fit. (Marginally -- the fly flap was stretched out in very immodest fashion, and not for any male enhancement pill reasons. I kept my jacket buttoned. This pants thing is killing me.) I'd last worn it to a wedding in 2002, according to the card in the pocket.]

Other than that, there was another AOL Reston office furniture auction, but I didn't feel the need to gawk this time, since I'm all done with that topic.

Also, we found that half of all clicks on online ads are worthless -- but we don't know which half. I just wanted to make the quote reference.

Lastly, I know this entry's items were out of chronological order -- the headline just scanned better that way.

Thanks so much for blogging about my Dad's service. My suit wasn't exactly comfortable either, in case that makes you feel any better. It was a special ceremony and I am glad you were there to witness it with us.