All the News You May or May Not Use at LiveNewsCameras.com

Al's Morning Meeting had an item yesterday about LiveNewsCameras.com, which is an online video news experience that comes out of the Chicago Fox affiliate. It launched this week: 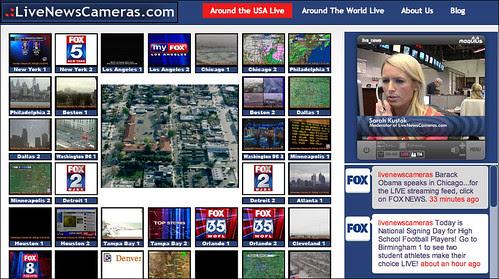 It's a moderated mashup of Fox news affiliate feeds -- if you click one of the updating thumbnail photos, you'll see the video stream from that station. If they're doing a news broadcast, you'll get it; at other times, you'll get a variety of things: Beauty shots of the scenery, raw live feeds from remote crews, traffic cams, weather radar, streaming feeds from their Web site, etc.

You can see the human element in the upper right -- they've got commentary from live video moderators who will highlight particular feeds. (Yesterday, you also overheard chatter from neighboring cubicles, though I think they've fixed that.) Just now, reporter Andy Roesgen was moderating. He'd been talking continuously for some time now -- it was kind of impressive.

The human moderation does add an extra dimension to the coverage (they also take great pains to point out that you can mute the moderator, but when you do that, you lose a lot of the value), but it also raises a significant problem: Having a human moderator is not particularly useful when there isn't anything going on. Which is going to be most of the time.

So, to avoid awkward dead air, the moderator either has to come up with filler (like rampant, unbased speculation during a crisis), or try to find something, anything, interesting from the available feeds.

And interesting doesn't mean relevant -- just because you get the unfiltered, raw scoop on a Philadelphia row house fire, doesn't mean it's relevant to you; you may find the illusion of relevance, which just means you get invested in something that wouldn't otherwise matter to you. It's kind of an artificial investment.

In many ways, it's kind of the news extension of the kind of "ambient intimacy" that many people ascribe to Twitter.

However, in Twitter may be kind of a solution to this -- they're already using their Twitter account and displaying the feed under the moderator video. Instead of trying to have a talking moderator 24/7 (or however long they're using human coverage), maybe they can pull in humans only when events warrant, and use Twitter (or similar alerts) to let people know.

Al has an interview with their news director -- it's in the nature of an experiment, and they're still feeling things out. Like I said, it has an interesting flavor, so we'll see what becomes of it.

Too. Many. Feeds. I think that thing might give people seizures.

If the thumbnails were all live video, I might agree with you, but as of now, they don't update more than once a minute or so. So it's not a wall of video -- I don't think it's too overwhelming.