When Your Coffee Just Doesn't Have Enough Kick 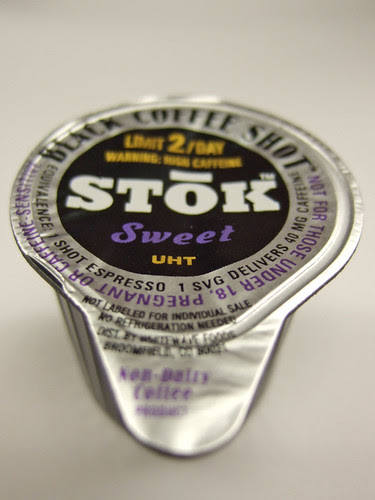 Not for those under 18, or pregnant women. Pregnant teens are doubly out of luck.

It's a Stōk ("stoke") non-dairy creamer (actually, since I haven't opened it yet, I don't know if it's actually creamer) that has 40 mg of caffeine, or the equivalent of a shot of espresso.

In other words, it a booster shot of caffeine for your coffee.

The manufacturer, WhiteWave Foods, is the parent company of International Delight (no surprise there with the form factor of the package, right?), though one would imagine that they're going after a different demographic than blissed-out, flavored-coffee housewives.

Why did I not try it? I was already drinking the yellow-handled 7-11 Fusion energy coffee, which is spiked with ginseng (not traditionally noted for its energetic properties, but it is good with a chicken soup and I'm sure it increases your chi or your feng shui or something), yerba mate (a mild stimulant), and guarana (which is just another of caffeine).

With all that shit already in the coffee (plus two packets of Equal), I didn't want to push my luck.

Between the Fusion energy coffee and the Stok shot, all they have to do is start brewing the coffee with Water Joe or some other caffeinated water for some real fireworks.

ha ha, i like how it's labeled "limit 2 per day" - that's just like begging me to put three in my coffee! let us know how it tastes...

* Sweetened, though probably just enough to cover up the caffeine bitterness.

* Flavor, can't really say -- I take my coffee light and sweet (just like my women), which covers the taste.

* The comedown is a bitch. Probably not due solely to the shot, but I was dragging all afternoon.