Looking at the Zombie Revival: The Perfect Enemy for Our Time

[This is the first of a few entries about the modern zombie.] 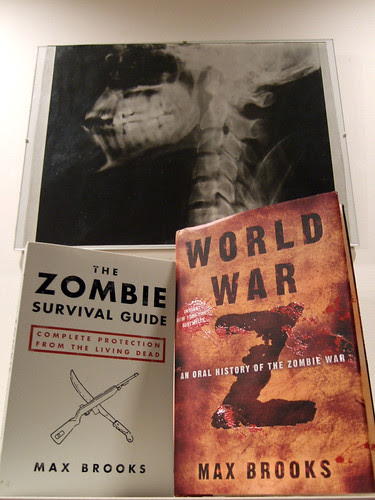 Max Brooks' Zombie Survival Guide and World War Z. The skull x-ray was salvaged from a book publisher's basement storage room during a work-study job a lifetime ago.

In case you can't tell from the picture, Max Brooks' Zombie Survival Guide and World War Z are two of my favorite books right now. I keep re-reading them. I've got zombies on the brain. (Braaaaains.)

And I'm not the only one.

Part of the reason why I think there's a resurgence in zombie interest is that zombies are the perfect enemy. They're not human (they just used to be human), so it's okay to hate them. They're already dead. They feel no pain. And once they turn, they're really obvious. There's no political correctness; no one's going to accuse anyone of zombie profiling.

(Zombies really stand out in a crowd. Unless it's a crowd of other zombies.)

And zombies want to destroy us -- there's no question about it. They can't be bargained with or negotiated with or even surrendered to. They are merciless and remorseless (and deserving of none in return). They're the enemy of all living things, they're relentless, and they won't stop until they're destroyed.

The solution to the zombie problem is drop dead simple:

You shoot them in the head, or you get eaten.
We are living. They are dead (well, undead). If they get you, you become one of them. "You're either with us or you're against us" doesn't get any clearer than that.

In other words, they're an unambiguous, black-and-white, us-or-them, guilt-free enemy.

And the kicker that makes them the perfect enemy? They stand up, moan, and come straight at you -- walking slowly. They don't take cover, they don't hide behind civilians, they don't plant IEDs, they don't learn from their mistakes (or ours), and they don't melt away into the shadows.

(Well, they're a little like suicide bombers in one respect -- they come at you with no regard for their own safety. But the classic zombies move slowly. They also don't explode.)

They never change tactics. They just come out, line up, and wait for you to shoot them.

It's a refreshing change. The perfect enemy for our time.

BOOM (Guilt-Free) Headshot!
What's more, I also see a lot of survival and gun-types have embraced the zombie preparedness theme pretty enthusiastically. Sure, preparing for the zombie apocalypse is a fun game that prepares you for other disasters, both natural and man-made: Do I have the provisions and equipment to bunker down and shelter in place? If I had to leave quickly, would I have a bug-out bag or go kit ready with the right supplies? Where would I go? How would I get there? Do I know how to read a map, treat injuries, start fires, purify water?

But as a bonus, in the zombie scenarios, you get to discuss -- even fantasize about -- the best ways to shoot lots of other people in the head.

What's the optimal range for zombie engagements? Do you use a scope or open sights? For quiet kills, a suppressed .22 or a crossbow? What's the better zombie-slaying assault rifle, the AR-15 or AK-47? Would buckshot fired from a 12 gauge shotgun be overkill (considering your reduced ammo load)? How much ammo should you carry for each of your weapons? How do you increase the probability of a headshot under extreme stress? What's better for close-in work, an axe, crowbar, or machete?

Because they're not really people, zombies are the perfect stand-in for your boogeymen of choice: Communists, terrorists, LA Riot/post-Katrina rampaging mobs, illegal immigrants, or jack-booted government thugs.

Even the most-hardened, callous keyboard warrior might be a little reluctant to endorse wholesale slaughter of a group of people (at least, in an open forum). But zombies? They ain't human -- fire at will.

Thanks -- I like your Zombie shirts; I see you'll be at Crafty Bastards next month -- I will try to make it out there and pick one up. -- Joe

brains....!
One of my favorite topics. I honestly answered my roommate when she asked why I have so many guns and ammo I just turned and quipped "to deal with the zombies" in a very even and rational voice... seriously confused her...

Just writing to let you know that I've mentioned this post in my article, Zombie Fiction Overload, Part I, which can be found here: http://notes.booksxyz.com/node/112. Any questions or comments can be forwarded to myself at kristin@booksxyz.com.
Thanks!
Kristin Praeuner