I guess I should give up all other pretense and just turn this into a skating blog.

I wasn't planning on going again so soon after my blister harvest, but I was in Sterling doing errands and it was such a nice day that I couldn't resist.

I started at the Route 28 overpass at about 5:45pm and headed west. There weren't too many people out that late in the day, so it was pretty uneventful. I stopped at my turnaround point, the Luck Stone Quarry Overlook, plopped down on a bench and watched the vultures gliding on the thermals for a few minutes.

There's a plaque on the bench: 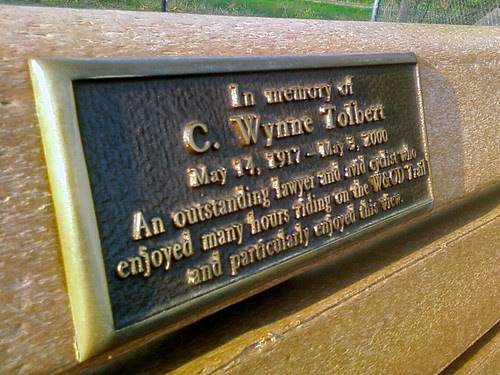 "In memory of C. Wayne Tolbert (May 14, 1917 - May 3, 2000), an outstanding lawyer and avid cyclist who enjoyed many hours riding on the W&OD trail and particularly enjoyed this view."
On the way back, took a shot of traffic calming zigzag stripes painted on Belmont Ridge Road (they were mentioned on Fark last week): 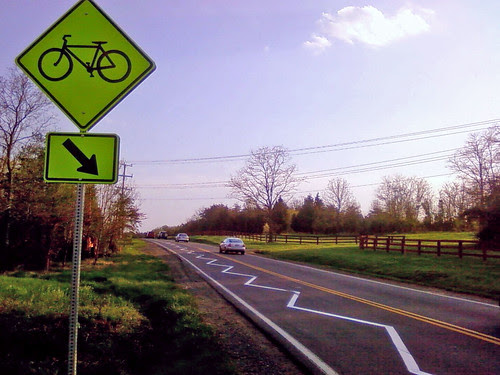 And here we get to the title of the entry. I noticed something different about a "Warn Before Passing" sign just off of Smith's Switch Station -- a bullet hole: 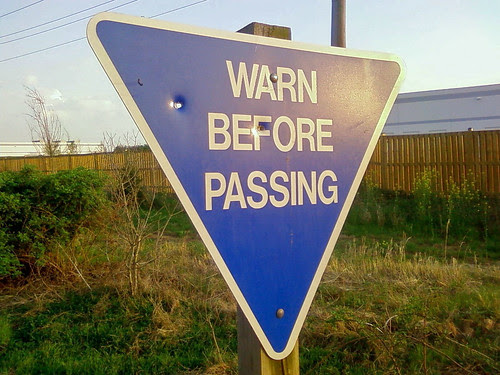 There's also a dent in the "F" that looks to be a second bullet strike. From the back of the sign, it's pretty obvious. Nice sized, too: 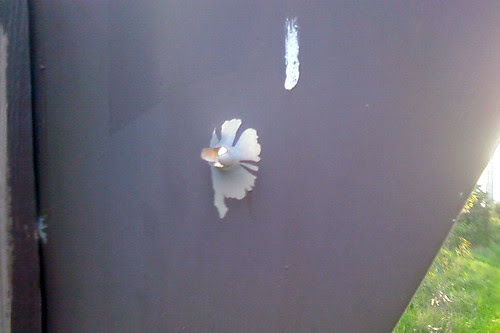 Anyway, my plan for afterwards was to try Cheeburger Cheeburger (I haven't been yet) as something of a reward (or, maybe the skate was pre-emptive penance), but that went out the window and I met a few folks, sweaty and stinking (me, not them) at Jackson's to rehydrate.

The feet held up okay -- I'd duct taped over the pinch points and hotspots, and it worked okay. I guess I'm getting ready for next Saturday's Baltimore Kinetic Sculpture Race. Which means I'll need to get a new heel brake before then (it's worn to the nub). I'm also working on a PVC mini-Fig Rig, which I hope will be a bit more suitable for a full day on skates than the Poor Man's Steadycam (which I still haven't really used). So we'll see how that goes.