2 Year Twitterversary Statistics: No More Than 184,520 Characters of Inanity

After eDemocracy Camp 2, I was thinking about how much Twitter had become the de rigueur conference backchannel / session notebook / fashion accessory, which I didn't think was the case for the first one just a year ago.

That got me wondering about when I first joined Twitter, so I paged back in my archives and found that I posted my first Tweet on April 22, 2007, which was just about my 2-year Twitter anniversary when I first started this entry.

[This entry, incidentally, is unrelated to any of the current "When Did You Join Twitter?" or "How long are you on Twitter?" foolishness that's been going around. Also, if you hadn't noticed, I've given up my previous petulant objections and am resigned to calling Twitter posts "tweets."]

Getting My Twitter Stats
I was curious about my own Twitter posting pattern; the quick, easy, and pretty way to look at your stats of course is to use TweetStats (which I also did), but I wanted a little more granularity. (For example, TweetStats calculates your daily average just using the days you posted, instead of looking at every day.) So I decided to pull and crunch the numbers myself. 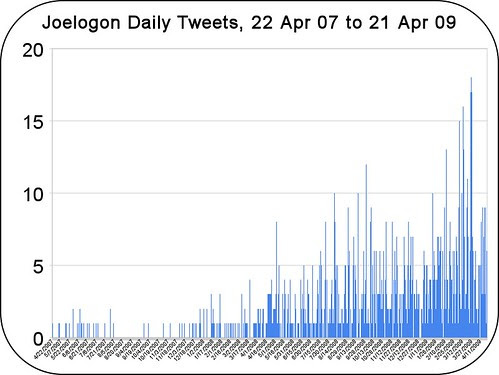 Click through to Flickr for additional notes by Patrick.
I signed up on April 18, 2007 and posted for the first time 4 days later. My posting was pretty much non-existent until the first spike (8 whole posts in a day!) from the Baltimore Kinetic Sculpture race on May 3.

I stayed primarily with phone updates until June 14, when I got Twitterific, and you can see a general trend upwards (I switched to Twhirl on June 25), with an all-time high responding to birthday greetings (March 26).

Pulling the Numbers
To get the numbers:
* I used the Java TwitterBackup 2.5 to pull the XML file, which basically has everything (it took about 50 minutes -- it does 20 per minute to avoid hitting API limits)
* As suggested, I did a bunch of find-and-replaces in TextEdit to clean things up and remove extraneous fields
* I then pulled the numbers into Excel, where I did some serious massaging of the numbers. This included fixing the year on the previous years' posts (in the process, I may have shifted some of the dates a day... damned leap year).
* I also added in the intervening days where I didn't post to Twitter, consolidating them to get my daily Tweet count (this is where using the FREQUENCY formula came in.)
* Finally, I plugged the numbers into Google Spreadsheet to get a pretty chart, and uploaded it to Flickr to get a nice, 500px wide image.

TweetStats gave me an average of 3.2 average posts per day (with a median of 2.0 posts), though my numbers for the entire period (counting days I didn't post at all) gave me 1.8 posts per day (median 1.0). I haven't done any deeper digging; Tweetstats has a good talking points topline, and I have the raw data if I want to look any further.