Ever wonder why oncoming cyclists on the trail wear big, shit-eating grins as they whizz by? I think it's either:

Unfortunately, I didn't get any photos of said bicycle cleavage (which should actually be "bicyclist cleavage," but the other way sounds more interesting and less creepy) when I went skating on Saturday afternoon.

It was the first really nice, over-70 degree Saturday of the spring, and I went to skate my usual Reston-to-Sterling trek on the W&OD Trail. (I note that my phone autocomplete thinks I mean "slaves" when I type "skates.")

As I Twittered, it was busy, but not crowded.

From Herndon through Sterling, there were a lot of cracks that spanned the roadway, in some places every 40-50 feet. Some were fairly wide (especially when compared to a 76mm wheel): 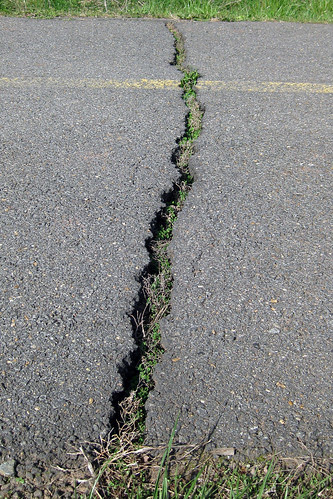 There's a new-ish golf course just west of the Route 28 overpass -- where the hell did it come from? 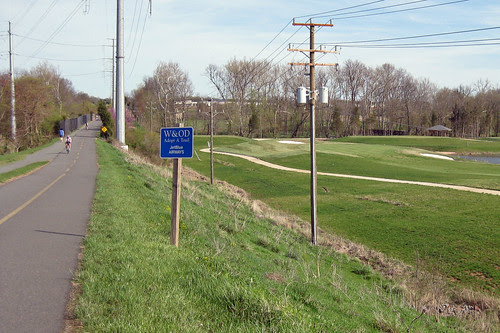 Some of the bridge interfaces had widening gaps, and there was some subsidence at the edges of the trail at mile 24.5: 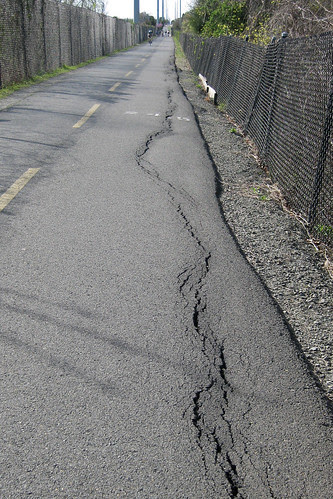 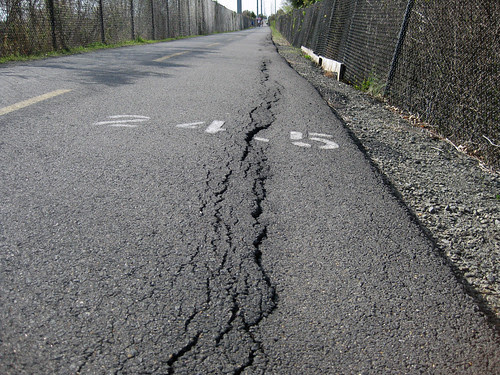 Given the current budget realities, I'm just hoping they can at least slap some vinyl patches over some of the wider cracks.

Here we see some topped trees along the power line right-of-way: 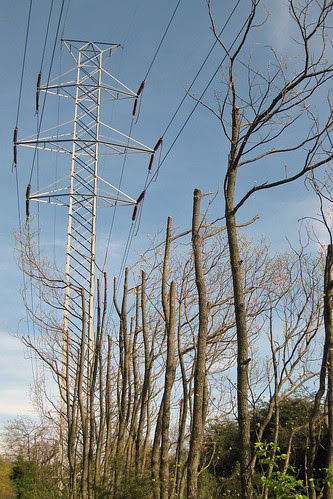 From Reston (the lot off Sunset Hills and Old Reston Avenue, at the 7-11) to my usual turnaround point at Ashburn Village Road is about 18 miles round trip (throwing in a few speed runs up and down the western side of the Route 28 overpass). In retrospect, doing the full mileage for the first skate of the season was probably not the wisest idea.

On the way back, I started having some problems. The hotspots, which had been developing at the usual spots on the inside edges of my feet, had turned into full-on blisters. Big ones, too, since my feet hadn't toughened up yet.

The blisters altered my stride, and between that and just flat out bonking and hitting the wall, my quads started to cramp up pretty bad. With 5 miles left to go, I ended up having to stop for a few minutes about every half mile.

I was officially no longer having fun.

I nearly broke down and called for a ride a few times, but I eventually made it back to my car. It took a while. And my feet look pretty nasty right now.

I was pretty thrashed and almost bagged on a birthday party down at the Georgetown waterfront. But NewMediaJim talked some sense into me. Who says Twitter is useless?

Awwwwww....sorry to hear that, but glad you got to the car. I usually ride on that trail, so I can relate. I'll try not to wear scoop-necked tops. ;)