It's regained a little bit more of its thickness since then, but one thing's that helped was consolidating my frequent buyer cards -- I'd gotten up to six (plus my gym card). Even using the smaller key tags (which I don't put on my keychain, which has enough stuff on it), they still take up a lot of room: 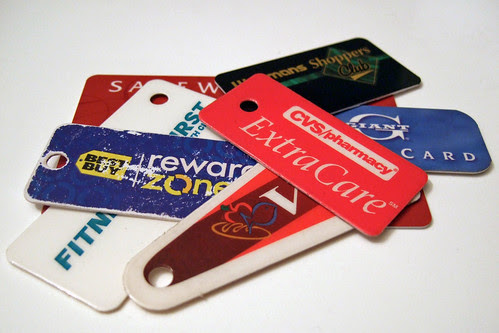 Wallet cruft. Like ephemera, except more annoying.
Now, a year or two ago, there was a Digg item about a card consolidation site (www.justoneclubcard.com), where you pick the stores you need from a drop-down and type in the account numbers, and it'll generate the barcodes on a printable, wallet-sized card. Pretty nifty.

At the time, it didn't support all the places I needed, though now it's pretty comprehensive. Of course, it doesn't have my gym, so I decided to make my own.

Not having an iPhone (and really, saving digital pictures of your club cards on your iPhone so you can run the on-screen image over the laser scanner seems kind of... perverse), I went lower-tech -- I threw the cards on my printer/scanner (you could also use a camera, carefully), adjusted them in Photoshop to print to twice the size of a business card, then folded the resulting paper in half to make a two-sided, wallet sized card: 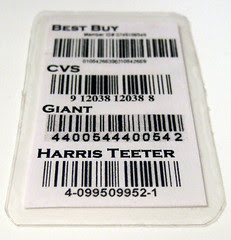 Attention miscreants: The numbers are dummied up.
The sloppy lamination is just using those no-heat laminating stickers from any office supply store. And I saved the layered PSD file in case I need to make future changes.

Here's a closeup showing the difference in thickness (more or less): 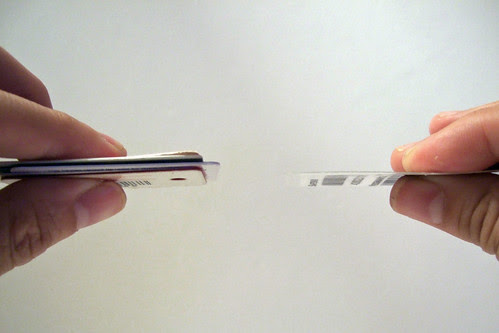 I haven't had any problems with it so far.

Anyway, it's just a little silly wallet space-saver so I have more room for more fat wads of bills. And my way was kind of a pain -- if justoneclubcard.com has all the places you need, just do that, it's easier.

Then again, I suppose you can save even more space by going the functional tattoo route. But save that for the Google/SkyNet work camps.

What, no Washington Post card?! :) Half of these places, I just type in my phone # (or my mother's -- we "share" her CVS card and supposedly my PetsMart card but not sure she uses it). But, if I'm going to actually carry them, hmm, nice idea. I like it.

I completely missed justoneclubcard.com the first time around. Thanks for pointing it out. My wallet won't be thinner until I've tested all of the scans, but soooon.

I live to serve.