Reblogging my Twitter posts (I still refuse to call them "tweets") kind of defeats the purpose, but it's instructive at looking at my state of mind through the evening. Or something: 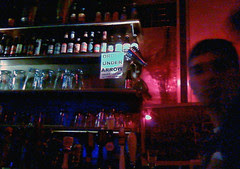 I'm more of a mid-week Galaxy Hut guy, so I can't say for sure that all Sunday nights are like the Sunday night before Labor Day. But it was certainly different, especially with the Clarendon Ballroom refugees questing for three-dollar pitchers (off a mistaken listing from some happy hour Web site)

The guy next to me just confused Motorhead with Radiohead (the song, incidentally, was Ace of Spades) 10:30 PM August 31, 2008

Admittedly, I only know Ace of Spades from that stupid AT&T Wireless commercial.

I think the Dragon's Milk (9% alcohol by volume) was starting to kick in.

I'm watching the US Open and I don't particularly care, but for some reason, I'm remembering the name Mats Wilander 11:00 PM August 31, 2008

The US Open was on the TV. I remember watching the final in 1988, when Mats Wilander won a 5-hour, 5-set match.

I don't have a related photo. Here's an unrelated one: 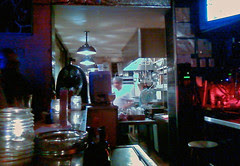 
I'm serious, someone was doing the Robot -- the part with the broken, dangly arm swing.

The ability to give an orgasm is simultaneously subservient and empowering 12:07 AM September 1, 2008

I have no idea where this came (ahem) from. Although I think I was at Clyde's for a nightcap at this point.

Anyway, that was Sunday night.