I had plenty of business cards on hand in preparation for Thursday's Twin Tech Party (at this point, recapped to death), but unfortunately they were all other people's, so I headed back home to restock.

I also did a quick workout, then proceeded to completely negate that workout by getting dinner at Masala Wok in Herndon, which had just gotten a writeup in Sunday's Post ("Curries on the Quick").

I had the Chicken Tikka Masala (medium heat): 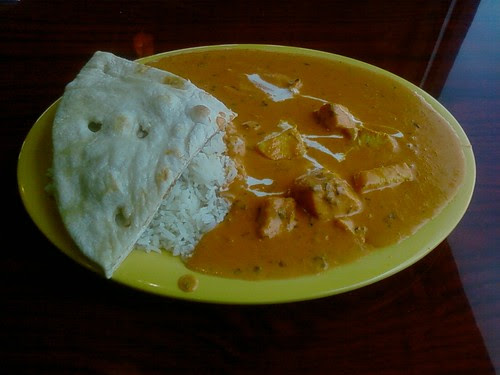 Well-plated chicken tikka masala. Cameraphone pic.
It looked very appetizing. The chicken was tender and tasty, though the masala sauce was a little rich and creamy for my palate.

Also, I have to agree with some of the Yelp reviews: The "medium" heat was disappointingly mild. (And this is from someone whose thermostat usually tops out at "American hot.")

It was good and I'll probably give it another shot, though it won't replace Charcoal Kabob for me (I note it's almost finished its remodeling and bakery expansion).

***************
Thus sated, I headed in to the Twin Tech Party. This was the first real test of the new GPS. Results were... mixed. I nearly got into an accident on the Whitehurst Freeway where it necks down to one lane (though that wasn't really the fault of the GPS), but it also took me through Georgetown at the height of rush hour.

The event itself was pretty good. There were jokes-a-plenty about picking out the scruffy startup folks from the whiteshoe NVTC types (though most of the sport coats and all of the suspenders, I'd wager, were from the latter group); it was hot as balls on the patio; I met a bunch of new folks and touched base with a bunch of familiar faces. All in all a pretty standard (albeit well-attended and good) DC tech event.

In this case, I think it looked slightly better than it tasted.