It's been a while since I bought a new flashlight, mostly because I haven't been active over at CandlePower Forums for the past few years. (The keychain cow with mooing action doesn't count, since I got that at a Books-a-Million. And neither does the Princeton Tec headlamp combo, since that was a closeout that I got from Sports Authority when I was just looking for a folding camp chair.)

Last week, I fell off that wagon in a big way. I'd been browsing TADGear (a staple for gadget types) and saw that they were liquidating their stock of NiteCore lights.

NiteCore is a relative newcomer to the tactical pocket light market (a field dominated by Surefire). I'd missed out on a lot of developments, and the CPF folks have been salivating over NiteCore, who seem to be doing things right.

Of course, I don't need any new lights, let alone tactical lights. So naturally, I ended up buying two of them -- a NiteCore NDI (Defender Infinity, which runs off a single AA battery), and a NiteCore Extreme (which runs on a CR123 3v lithium battery, which looks like a shorter, fatter AA battery and can go for 6 or 7 bucks a pop if you're silly enough to buy it in a store -- you can get them for a buck or two online): 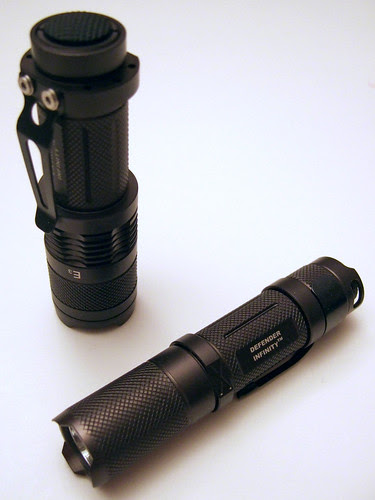 NiteCore Extreme (standing) and Defender Infinity.
Impressions
When it comes to reviews, I'm not that much of a flashlight geek, so I'm not going to do any runtime graphs or beamshots (go to CPF or CPFReviews for that sort of thing).

They're both LED lights, so there are no bulbs to replace or break; they're really solidly built, hard anodized, with push button tailcap switches (the Infinity also has a lockout tailcap, which prevents it from turning on accidentally.)

The neat feature is the electronic control -- by momentarily twisting the head, you can switch from High to Strobe and back. And by loosening the head slightly, you can pick any brightness setting in between the highest and lowest (this YouTube video demonstrates the interface and the different modes).

Have I mentioned that they're amazingly bright? (Up to 130 lumens for the NDI and 190 for the Extreme.) You don't get a lot of runtime at the max, though, and they run pretty darn hot, which is where the user settings come in. If you don't do a lot of low-light, SWAT-style room clearing (and I don't), the low modes are a lot more useful. 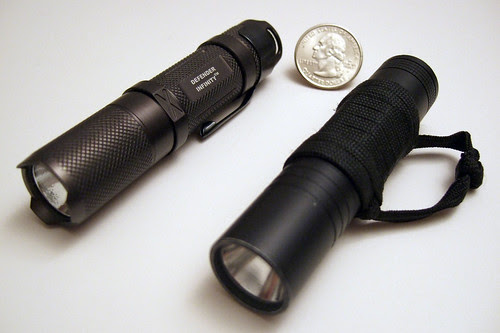 It's about the same size (slightly bigger than the AA battery that powers it). I didn't do the paracord koppo wrap that you see on the L1 -- the loop makes it more secure to hold, but it's a bit too small on the NDI, and might interfere with heat dissipation. So I took a pocket clip off an old Gerber Infinity, which seems to do the trick.

Here it is in hand: 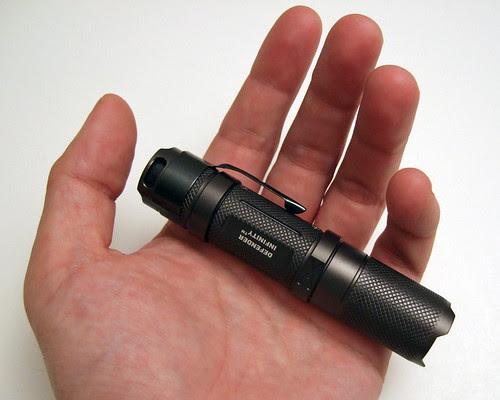 Eyeballing the brightness, the NDI at somewhere between low-to-medium is about the same as the L1, but the high setting just blows it away.

Here's the Extreme. It has cooling fins: 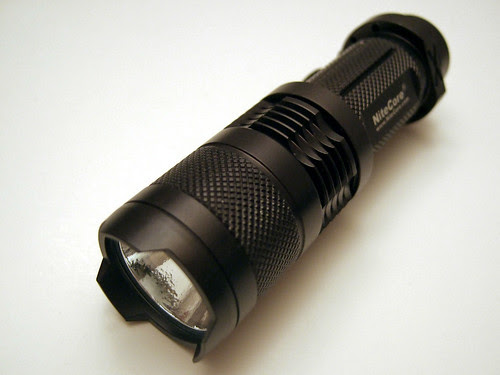 Both of them have the uber-tactical scalloped edge at the front of the light. Nominally, it's supposed to hurt more if you have to clobber someone with it, but really it just means you'll wear holes in your pockets faster.

When it comes to lights and other devices, I prefer to stick to commonly available batteries like the AA. And for most applications, 130 lumens is overkill, let alone 190. So the Extreme is more in the nature of a cool toy (though I consider it a substitute for a more expensive Surefire, which means that by buying the Extreme, I'm actually saving money).

Check out my Flickr set for more size comparisons, including the Extreme compared to my ARC LSL (which is also obsolete).

Besides being darn useful things to have around, carrying a flashlight on your person marks you as part of the gadget enthusiast tribe (as typified by any number of Web-based discussion forums out there). Which means that if you've got a light, it's a safe bet that you're also carrying a fancy lighter, a knife, a nice pen, and a bunch of miscellaneous pocket or keychain tools (as well as collections of each at home) -- collectively known as your Every Day Carry (EDC).

(Camera buffs and gun nuts are related, though specialized, branches of the gadgeteer family.)

I'll talk more about the flashlight, EDC, and gadget cultures online at some point.

My geek-sensors are going into overdrive.

Play your cards right, missy, and I'll show it to you sometime.