A Delayed Entry Into the Land of the GPS-Enabled

Over the weekend, I had the chance to play around with Garmin Nuvi 200 (an entry-level car GPS unit), and I have to say that I was pretty impressed with its simplicity and ease-of-use.

Thus far, I'd managed to stay outside of that particular realm of gadgetry, which makes no sense, as I've been living down here for over a decade, yet when I drive to a new place in DC, it's even money that I'll somehow end up near the National Shrine of the Immaculate Conception.

So, I was pretty psyched to see an offer that was theoretically too good to pass up on bargain/coupon aggregator site Mother of All Deals: Best Buy had the Garmin Nuvi 200 on sale for $149, with an additional printable $50 off coupon, bringing the total down to $99 and change (lest you think I was being selfish with the scoop, I posted it to my del.icio.us this morning). So I went to my local Reston Best Buy.

Now, I'm not a Best Buy basher -- I go in, swoop down on their loss-leader items, politely say "no" to anything the salesperson or cashier offers me, and get out. This time, though, wasn't so easy, as the GPS units were locked in a cage and required a manager's key.

I'm not exaggerating -- it took nearly 20 minutes and talking to four different sales associates before I was allowed to give them my money. (I was willing to wait, as they only had two units left and that $50 coupon wouldn't work with rainchecks. It was somewhat amusing -- the sales associates were more annoyed than me that we couldn't track down a manager.)

While I was waiting, I looked down in the Wii section -- just as I twittered, there were six Wii consoles just sitting there: 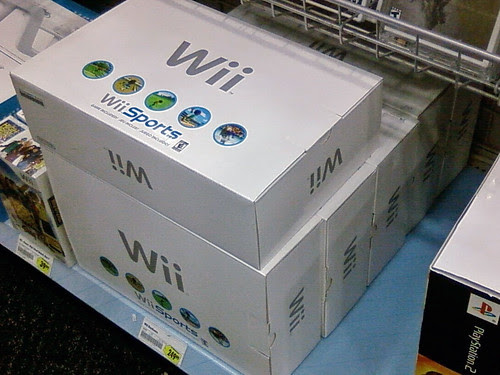 You gotta get yours, but fool I gotta get mine.
Apparently, though, the hotter item was the Wii Fit pad, which sold out as I watched (there were still four Wii consoles left when I finally got out of there).

Eventually, the key was found and I got my $99 GPS. I set it up tonight, but I'll give it its first real try tomorrow.

Oh, and I did a stair stepper workout tonight and nearly left my keys at the gym. That would have been annoying.