[The third in a series of entries looking at the modern zombie. See why zombies are the perfect enemy for our time and why you shouldn't try to overanalyze zombies -- like I'm going to do here.]

Crunching the Numbers on Zombie CrackingFor the bulk of World War Z, the world is in the throes of a full-fledged, Class 4 zombie apocalypse scenario, where zombies roam the Earth and humanity is under constant assault, hunkered down in a few safe zones. It's essentially a static siege situation.

Now, in the Max Brooks books, zombies freeze solid in the winter (though they thaw in the spring with no ill effects). Additionally, winters are harsher and longer, lasting 8 months out of the year due to a "nuclear autumn" effect, where soot and particulates from burning cities and limited nuclear exchanges block sunlight, causing global cooling. (Where "spring's like winter used to be," p. 320)

It's also established that inhabitants of besieged outposts wait for the zombies to freeze solid, then raid the surrounding areas for supplies to get them through the rest of the year. (p. 190)

Now, ex-infantryman Todd Wainio talks about the liberation of Detroit, where they faced a zombie "moat" of over 1 million zombies (also known by the nickname "Zack," a callback to Vietnam's "Charlie") surrounding the twin forts of Comerica Park and Ford Field (p. 321)

Here's the problem. You're surrounded by a million zombies (who have to pretty much be wall-to-wall: see below). Winter starts, and they freeze solid. So those people who aren't out foraging take their trusty crowbars and start cracking zombie skulls (example, p. 130). So the question then becomes:

That's 60 zombies per hour. Assuming 8 hours of workable daylight, with rest periods and such, call it just 4 hours a day of actual crowbar-swinging time. That's 240 zombies per person, per day.

That means, each individual frozen zombie skull-cracker could account for 57,600 zombies per year.

Which means that, in theory, 20 people dedicated solely to zombie-bashing (and not worrying about disposal, maintenance, or anything else) could crack over 1 million zombie-skulls in a single year.

And that's just by hand.

For More Fun, Just Add Guns
The book also talks about the Battle of Hope (New Mexico) where the military, using massed lines of infantry and a one-shot, one-kill philosophy, fights and wins their first major engagement to retake zombie-occupied America (everything east of the Rockies) -- (p. 273, my favorite part of the book).

The soldiers line up shoulder-to-shoulder in two ranks for uninterrupted firing (one shoots while the other reloads), shooting at a rate of one shot per second in a deliberate attempt to keep a mechanical pace and "Out-G the G." (This is actually a nice David Hackworth reference, though for Hackworth, the G stood for guerrillas in Vietnam, not ghouls. As far as we know.)

Since Brooks' zombies are slow zombies, they'd be converging on the defensive position, slouching and shambling almost shoulder-to-shoulder. 1 primary/secondary shooter pair, killing one zombie per second, gives you 60 zombies per minute (assume just slightly less, since shooters have to switch position every 30 shots or whatever the magazine capacity is); or 3,600 zombies per hour. (In reality, no one could keep up that rate of fire for an extended time -- you'd burn out the barrel of your rifle.)

If you assume a constant rate of killing (at the Battle of Hope, the pace slows down as zombies start piling up), you just need 278 shooter-pair-hours to kill a massed bunch of 1,000,000 zombies. Which means that 556 shooters (and their supporting personnel) could theoretically pulp 1,000,000 zombies in an hour.

(The bloodiest human battles, like the Somme or Antietam, don't even begin to approach these numbers -- if you look at the number of killed, not wounded. Zombies always walk -- upright and slowly, they don't dodge, they don't take cover and they don't shoot back. However, they won't stop for anything but a headshot.)

The timeline extends since you have to allow plenty of time for the zombies to walk into firing range, which is a good thing, since you need to rotate shooters to give plenty of rest breaks and allow time to switch out weapons and replace barrels.

Basically, if the humans are able to pick their battle; if they're set up in a good, well-defended position; have enough supplies and enough backup shooters; and nobody panics, it's a foregone conclusion. (Oddly, in the Battle of Hope, they rely on firepower alone, with no barricades, elevated firing platforms, earthworks or trenches to slow down the zombies -- though eventually the massed zombie corpses form their own barricade. This would seem to ignore the lessons of the Battle of Yonkers, where insufficient or irrelevant force protection measures contributed to the debacle).

Wisely, the book also doesn't specify the size of either the human force or the number of zombies killed.

Back to Detroit -- the Summer Scenario (Also with Guns)So we're back to the Siege of Detroit. It's the summer and there are a million zombies shambling around the streets. Think the Dawn of the Dead remake, where the mall is completely surrounded by a sea of zombies.

This is actually a little problematic -- looking at the satellite map, Comerica Park and Ford Field are in the middle of the city: 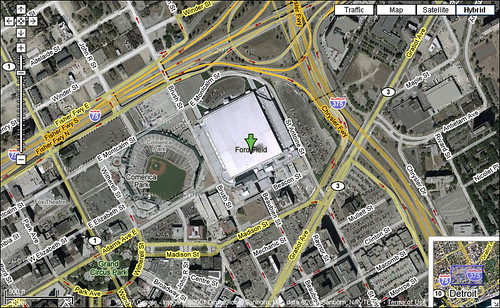 Google Maps shot of Comerica Park and Ford Field
There's some open space, but it's not like, say, FedEx field, surrounded by parking lots: 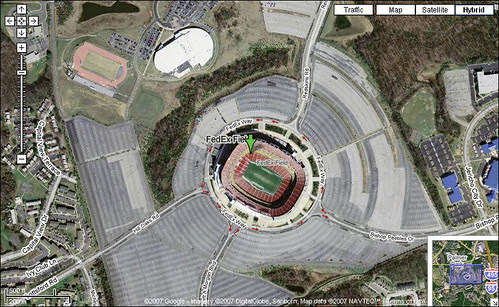 Google Maps shot of FedEx Field
Assuming each zombie requires about 3 square feet of standing room, that's 3 million square feet of zombie; it's a square about a third of a mile on a side, or about 69 acres total.

Anyway, forget that for now. As long as the defenses are good and the zombies can't get in, you can airdrop rifles, a crapload of ammo, and a Special Forces instructor to train shooters, then thin out the zombies at your leisure until winter comes and you can start cracking skulls.

At more realistic rates of fire -- a zombie headshot every 10 seconds, or 6 aimed shots a minute -- that's 360 zombies per hour, or 2,880 zombies per 8-hour day (again, we'll assume two-man teams -- one person shoots while the other rests and reloads), that's 347 shooter-pair-days to kill a million zombies.

If you figure Brooks's zombies are unfrozen 120 days out of the year, 4 shooter teams -- 8 shooters, plus support -- firing constantly, 8 hours a day, every day, could break the siege in a single year (as long as they could keep the ammo supply coming and rifles functioning).

(Also, 6 aimed shots per minute is extremely conservative, considering that a Civil War soldier with a muzzleloading black powder musket could fire 2-3 aimed shots a minute.)

Air SupplyAs for the ammo required in the zombie shoot -- figure 30 lbs for a case of 1,000 rounds of 5.56mm ammo. A million rounds is 1,000 cases, or 30,000 lbs, well within the capacity of a C-130 Hercules. Making allowances for the weight of the different parachute delivery systems (I'm not an expert -- whatever would be appropriate for a small landing zone; low speed, low altitude would be okay -- it's not like zombies have anti-aircraft capability), you wouldn't need too many sorties, and the book establishes that the U.S. still has a most of its airlift capacity (p. 170).

It would seem to be an efficient way to help thin out the zombie population. After all, each zombie killed at a static defense spot is one less the army has to deal with, and that's why safe zones were left in occupied territory in the first place -- to serve as bait (p. 109).

So What's the Point of All This?That's a very good question. Basically, it shows that, as enumerated in the book, once the situation stabilizes after the Great Panic, the zombie threat is best seen as a logistical problem -- an exercise in pest control.

Sure, you can rationalize it by saying that even my conservative zombie disposal numbers are too high, due to lack of ammo, too much snow, other factors (feral animals and people, disease, etc.) , etc. It's primarily a thought experiment -- one that shows that I've spent way too much time with what's my favorite book right now.

If you can equip enough people and recharge the compressed gas cylinders in a timely fashion, one good way to deal with masses of frozen zombies could be the cattle killing pneumatic hammer that was used as a plot device in the film 'No country For Old Men.' Depending on the weight of the rig and how many shots it gets from a cylinder, this could let a crew kill zombies for a longer duration than swinging crowbars.

Also, when it comes to frozen zombies, if they're standing in massed ranks when they freeze, this could make for a very effective application of a chainsaw. With the zombie offering no resistance, a chainsaw wielder could walk down a row of zombies, lopping off heads as he goes. A two man framework that held the chainsaw at the preferred height could allow the two operators to get more work done than either could do separately with their own chainsaws.

Also, since improvisation is a necessity in such conflicts, gardening tools like hedge clippers could be enlisted as less effective options. Since there would likely be far more personnel available than chainsaws, not to mention the maintenance needed for the units keeping a certain portion out of service at any given moment, making use of these lesser cutting tools to dispose of frozen zombies would be well worth considering.