A little while back, I was listening to my iTunes at work, which is hooked into Last.fm (as expected of any social media type -- remember, anything worth doing is worth sharing, right?)

Here's my profile. I haven't really spent much time with the social discovery aspects of Last.fm (or put much effort into the tagging/rating/metadata bits of it), which is why I noticed with a start that I showed up as a top listener of The Positions: 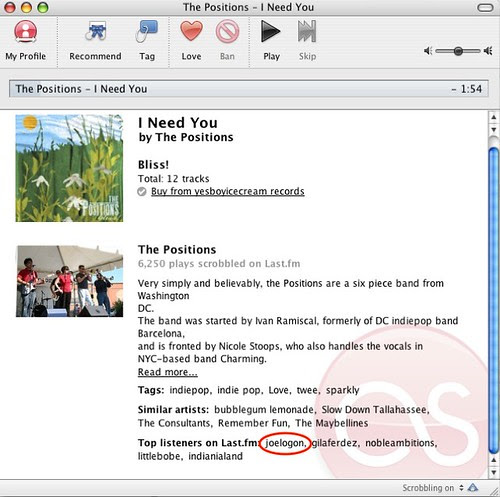 Joelogon outed on Last.fm as a top listener of The Positions
(For a little bit, I thought the band photo was one of my Clarendon Day shots, but it's not.)

So, over time, I've been keeping an eye to see when I come up as a top listener (I assume there's an app or a search or a feed somewhere that'll show this, but my methodology was just looking up when I hit a more obscure track).

Here's what I see so far:

* Steve Coleman and Metrics ("I put so many kids to sleep, my specialty is pediatrics.") -- I got this after I heard it in a Tower Records listening station. Go figure. I remember when Hutch was driving us to a show, and this CD came on. We were both shocked that someone else knew the group.

* Tallulah -- I got this one from CDBaby after hearing a song of theirs ("Untied") as bumper music for a This American Life episode. They have a song about bacon, too. It's good.

* Clang and Zen Cowboys -- Both of these were acquisitions from the 88-cent clearance bin at Sounds on St. Marks back in the 90s. (The Maps of Google says it's still around, which is surprising, yet pleasing, to me.) Took a flyer on Clang since the album was named "Pol Pot Pie" and it has a track named "Shroud of Urine," which is not great, but the rest of the album is good. The Zen Cowboys album is really good, though (and I don't even like... whatever genre it is they are).

Now, looking at my Top Artists chart shows it to be a little skewed, since I don't have my entire CD collection ripped and it's not catching any of my home or laptop stuff. (And how can Kaiser Chiefs be #5 already with 115 plays? I only picked up the albums last week! Probably left it looping overnight or something.)

That raises the question -- do people try to game Last.fm so they show up as top listeners? Kind of pathetic, but I wouldn't put it past people -- recognition is recognition, right?

Anyway, last trip to my parents' house, I unearthed a bag of CDs. (I'd given them to my sister way back, thinking she could trade them in, but with the stipulation that she had to listen to each one at least once before doing it. Guess she never got around to it.) It's got all sorts of obscure, 88-cent bin goodness, so maybe I'll...

Nah, that would be silly.

Tags: the positions, with a start, lastfm, top listener