My Friends Are a Bunch of Useless Drunks

And yet, Tuesday night, I still managed to eke out a win at "JOTTpardy," a flavor of Jeopardy at Jimmy's Old Town Tavern where crowd participation is not only allowed, it's encouraged. Without a single correct answer from my compatriots.

I got there late during the qualifying rounds, so I was thoughtfully volunteered to go up, but I made up for it in the tiebreaker (movie quotes -- easy ones, too: The "census taker" bit from Silence of the Lambs and the "mad as hell" bit from Network).

Now, going in, I had pretty low expectations. In high school, I was on an "Academic Challenge" quiz show team. We were smart. We practiced. We got stomped.

(Just like in the Voight-Kampff test, reaction time is a factor.)

I did OK in Heroes (song titles) and Spam Trivia, got blown out in Canadian Provinces (spelling) Carls, and, um . I managed to steal enough points that I was in second place going into Final Jeopardy, which was Bush Cabinet members.

I bet it all (less one), and as it turns out, got it right (I mean, really -- the Secretary of which Cabinet Department would you expect to make an appearance on Jeopardy?).

It would have been all for naught, though, since the guy in first place got it right, too... except he forgot to answer in the form of a question.

Hey, I'll take what I can get: 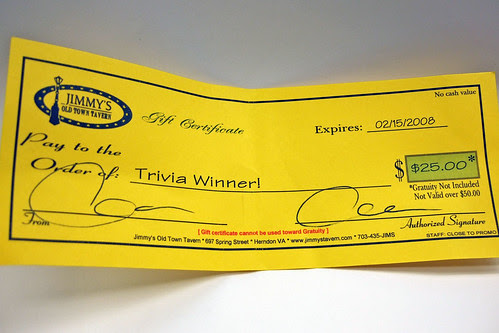