Caught Up in the Halo Hype (The Last One Standing)

Up until now, I've managed to avoid most of the hype around Halo 3 (which should be out... right about now). I'm not much of a gamer -- I have an Xbox (Zero60), and I completed the first Halo (though only on Heroic, not on Legendary), but that's it. I don't even have Xbox Live.

Then, last week, I caught this clip of the Halo theme done on Mario Paint:
It started with that. Now, with all the commercials and the hype, I can't get the Halo theme out of my head.

It Gets BetterThen, today, saw this Halo promo short film on the Discovery Web site: Halo: Last One Standing, which is evidently part 3 of a series set right before the events of Halo 3, with effects done by WETA (the SFX company that did Lord of the Rings, not the public broadcaster).

Just as an example, there's a scene about halfway through, where a Marine gets jumped by a Brute, tries to scramble away and gets pulped by the Brute and his Gravity Hammer. It's chilling and brutal: 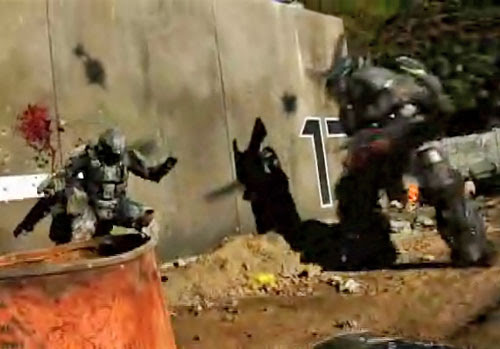 Note the blood spot where the unfortunate Marine got Hank Aaroned into the wall. At least he died with his pistol in his hand.
If the Halo movie looks anything like this short, it's going to rock.

However, in the spirit of sucking out the fun of sci-fi by overanalyzing it, I do want to point out two things that don't make sense:

1. Early on, a Marine grabs a Brute Spike Grenade that's sticking into the wall next to him about to explode, and hurls it into the air, blowing up a Covenant Banshee that's streaking by: 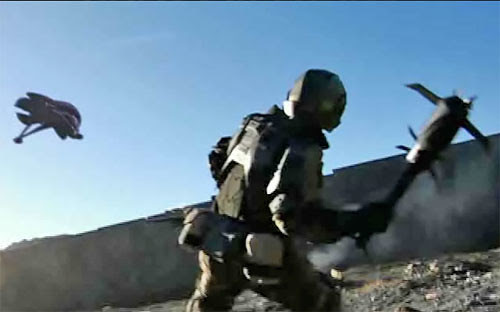 The Banshee he's going to frag is off-screen.
It looks really cool, but leaving aside the fact that it's ludicrous (unless he was just trying to get rid of the grenade and simply got improbably lucky), it's way too short of a throw. The grenade, which is about 2/3rds the length of a baseball bat, barely completes a full rotation and doesn't diminish appreciably in the distance before it hits the conveniently-passing Banshee. For the Banshee to be that close, it would have to be a whole lot bigger.

Yes, I know they applied artistic license to fit everything in frame, but you're already having a guy shoot down the equivalent of, say, an A-10 ground-attack jet by chucking a hand grenade at it -- we're already stretching credulity pretty far.

(Now, if you have the Master Chief do it; sure, why not -- he's a cyborg. But you still have to fix the perspective problem.)

2. The apparent plot of the short is that the Marines need to figure out where the Master Chief is going to land by painting him with a laser designator: 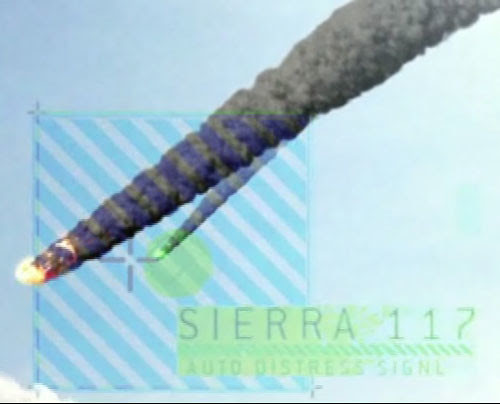 According to the dialog, "Search & Rescue teams are awaiting coordinates," and "That's it, we got it; recovery team has his coordinates."
Of course, needing a guy on the ground to paint a re-entry vehicle makes absolutely no sense. To make sure the guy was within visual range, you'd need to put in him the general vicinity of the landing (and if you knew that, you wouldn't need the guy).

And it's re-entering the atmosphere -- it's not something you can hide. Once they spot it on radar/lidar (or just look out the window of that hovering Pelican dropship and follow the smoke trail), they'll know where it's going to land (the guy on the ground wasn't marking it all the way down, so it's not maneuvering -- it's on a ballistic trajectory).

I suppose it could have been explained away as some back-assward way to do IFF interrogation,if they were trying to sneak the Master Chief's re-entry vehicle in among a cloud of decoys, but the dialog and on-screen action don't indicate this (and there's that whole "guy on ground" problem again).

Anyway, this is an awfully long entry for someone who ostensibly isn't interested in the Halo 3 launch, so I'll just say I hope the movie is good, whenever it comes out.

I think that it ws just something cool that they wanted to do, not anything htey wanted to perfect. I thought it was neat just seeing it on camera, not digital.