Thank you, nice Jehovah's Witness ladies who rang my doorbell

I'd like to thank the two nice Jehovah's Witness ladies who rang my doorbell this morning. I was already up and about, so they didn't wake me up, though they did do the whole "Do you speak English?" thing (I answered, no, I don't speak English), followed by the "Oh, you speak English very well" (which doesn't actually make things better, and may in fact make them worse) and then mentioned the dead University of Vermont girl from Arlington as a timely lead-in into handing me their literature.

I'd like to thank them because if they hadn't rung my doorbell, I wouldn't have known about the walking stick insect that was on my door, and I wouldn't have been able to take a few pictures: 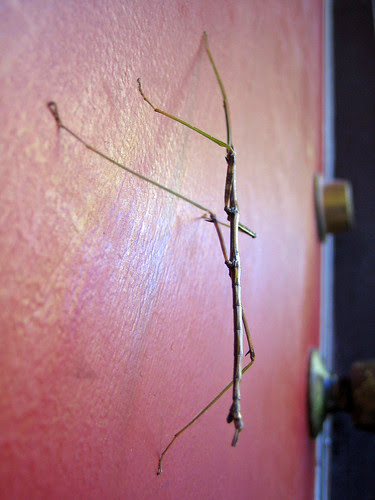 I used the macro setting on my camera (look: actual depth-of-field!), and didn't need to post-process the photos too much (yes, my front door is red). 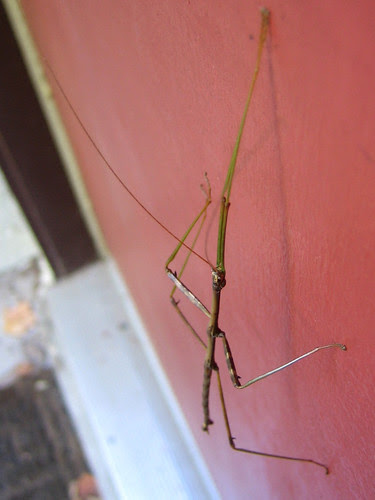 I also took what might be the World Most Boring 30-Second Video, but I will spare you.

In other news, I'm still moving a little slowly, following last night's DC Bloggers Happy Hour (Which I will write about after I cut the photos. But I have to make a meat loaf first.)

I was definitely not up for the Maryland Brewer's Oktoberfest, so I passed it up. In retrospect, though, it was a nice day, and I could have been designated driver. Guess I wasn't thinking too clearly.

It doesn't look particularly stick-y here. But it is a cool looking bug, ain't it? -- Joe

I've got my nose right up to the screen inspecting this bug. I've seen them before but yours seems more stick like than any other.