Rolled into Arlington to enjoy the Clarendon Day festivities on a bright, clear fall day. Got there just after 2pm; as I was walking around, a guy stopped me and asked "Do you work at Rick's Tattoos?" I said no, but in retrospect, I should have said, "Yeah... did I do your ink? Oh, by the way, the health department found that our autoclave's thermostat has been a bit off, so you might want to get checked out..."

As I was passing the first stage, I heard a song I recognized and thought, "Isn't it a little early to be doing covers?"

Then I figured out that it was The Positions, a band I've been meaning to check out ever since I first heard about them on Metro Connection: 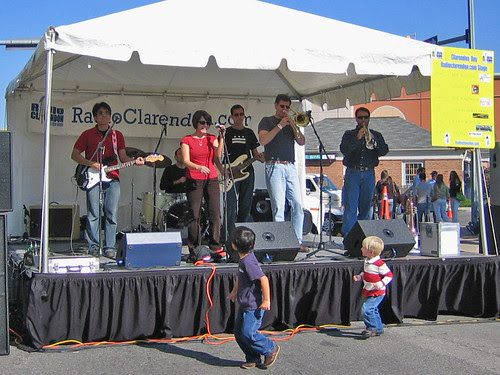 They're a pretty tight band; I like them, even though the horn-based pop has a lot of ska-ish qualities, and I don't really like ska.

Anyway, I picked up their CD.

I had a couple of shots that could have been good, but just fell short in execution -- here's the album.

Met up with Jenny and Adam (well, Jenny first; Adam finally joined us about 4 hours later); I had some Indian food, and some paella. Also ran into Sarah and Allison and met some of their friends. Eventually, the Captain showed up, and we went to the Beach Shack. That's when the trouble really began, and I have photos and video to prove it. But that will have to wait for another time.

Also, I was outside briefly just now and caught a bit of the Orionids meteor shower. Orion is the one constellation I can identify readily, so it was easy to find (well, that, and the Direct TV satellite dishes all point south.) I guess I got lucky and saw one definite shooting star right away, as well as a few other glimmers of movement, but it was cold and I told myself I would get to bed at a decent hour (wrong).

Hey, cool, I know the folks in the band--I'm going to send them a link to your post. :)