I Am Immune to Red-Eye. Find Out Why.

I just posted my photos from our last regular season kickball game yesterday. (Playoffs, which I'm not going to be able to make, are on Sunday, which means it's all off-season until next spring.)

(The game itself was exciting, if only because we scored 7 runs in the first inning, and then, um, let the other team score 5 runs. We eventually won, 14-7 or so, including my contribution, running through our third base coach's stop sign -- knowingly -- and sliding under the throw -- very impressive, if I do say so myself.)

Anyway, I took some snaps from the field and the bar; this is the only one I'm in: 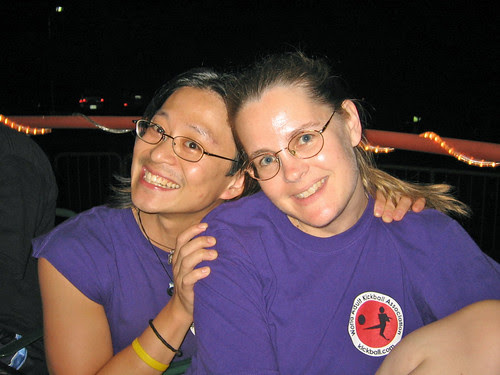 Me and League President Tara.

All of the photos from the bar were taken using the flash, so there was a lot of red-eye to remove.

I've noticed that I've been pretty immune to red-eye, though I never really thought about why. I had a vague notion it was because of my glasses, but in this pic, Tara had pretty good demon eyes going, despite her glasses.

Then it hit me: My last few eyeglass prescriptions have all had an anti-glare coating. So that must be it. Chalk up another benefit of wearing glasses. (The only other one being "partial protection from flying debris." For girls, add "can look over their glasses for that sexy librarian look.")

Anyway, everyone has their own method of removing red-eye with Photoshop. (I never use red-eye reduction mode on my camera -- it's annoying and it spoils the shot. And forget about candids.) I also don't use auto red-eye removal tools, because I am apparently a control freak.

After experimenting with a bunch of different red-eye removal methods, here's what I do. It's really simple, since I am a hack when it comes to Photoshop:

1. Set the Brush tool to saturation mode, and desaturate the red part of the pupil, which is the flash bouncing off the back of your retina -- the red-eye will turn grey.

2. Use the Burn tool to darken the now-grey pupil to black, which is its normal state.

That's it. No blending, mucking around with layers, replacing colors or anything else. Just desaturate and burn.

Doing it this way results in a more natural-looking pic than what most auto-redeye-reduction tools can do, since it preserves the shine reflecting off the cornea, instead of turning the center of the eye into a solid pool of black. That's pretty creepy.

Anyway, it's fast and works nearly all the time -- except for some folks (say, the Irish) who have really light eyes. It's even worse if they're in really dark rooms (say, bars), where their pupils are blown wide open. Not much you can do there to keep it looking natural.