So I didn't manage to do most of what I set out to do this holiday weekend, as expected.

What I did manage to do, though, was buy a whole lot of digital media, from a variety of retailers: 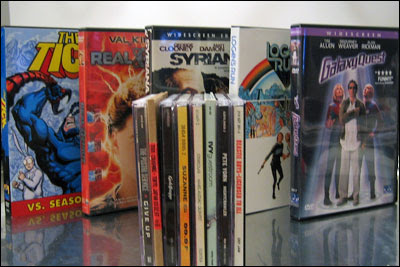 For the DVDs we've got The Tick vs. Season 1 (or rather, most of season 1, since Episode 11 wasn't included, apparently because it featured a parodic cartoon likeness of Cindy Crawford that they couldn't secure the rights to) , Real Genius, Syriana, Logan's Run and Galaxy Quest.

CDs, I finally succumbed and got Goldfrapp - Supernature (Circuit City had an all-CDs for $9.99 sale, but good luck trying to find anything in the racks; their shelving system is only marginally influenced by the alphabet); The Postal Service - Give Up; Soul Coughing - Tokyo, Japan 03.02.97 (Live) -- I passed up one for the '94 Paris show; Suzanne Vega - 99.9F; Stereolab - Mars Audiac Quintet ($1.99 -- it was playing in the CD Cellar); Ivy - Guestroom; Pete Yorn - Nightcrawler; and Beastie Boys - Licensed to Ill.

The music I should have no problem consuming; rip the CDs and I'll be listening at work or on my iPod shuffle. The DVDs, however, join my growing stack of bought and unwatched movies.

The problem with consuming DVDs (ignoring portability) is that video has to be watched -- and for movies, preferably in a continuous, uninterrupted block of time. You can't really "info-snack" your way through a movie -- or I can't, anyway. You have to watch and listen for the full two hours, and there's not much else you can do solely using touch, taste and smell (without a willing partner, that is).

I think this is especially true with visually-based media -- you have to be primarily focused on it to consume it. It demands and holds our attention. At least with music or books on tape, you can be doing other stuff. But to watch a long-form movie, you have to be plunked down in front of a screen, and you pretty much need to pay attention.

Anyway, I guess that explains why I keep watching movies I've seen a hundred times before -- because I've seen them before, I can be messing around on the computer and I can just look up at the good parts. Or it won't matter if I fall asleep somewhere in the middle, because I know the story.

Finally, this was supposed to be a simple list (with a picture) of the CDs and DVDs I'd bought this weekend. (I'd also gotten a few books -- 3 for $10 off the Barnes & Noble remainder stacks, but that would be so analog.)

Oh, and I did find myself tuning into the 'Dark Angel' marathon on Sci-Fi Channel, even though they were episodes from Season 2, which I now own on DVD. Why do this? Commercial breaks. Also, Jessica Alba is hot.