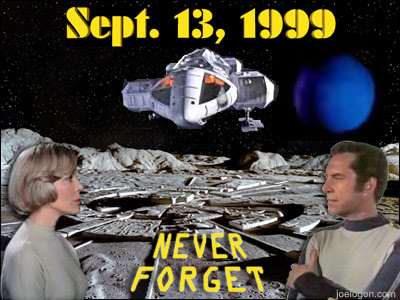 September 13, 2006 marks the anniversary of the tragic events at Moonbase Alpha, where all 311 of the base's inhabitants were lost and presumed killed after terrorists set off a thermonuclear chain reaction on the moon's Nuclear Waste Disposal Area 2.

The resulting catastrophic explosion blasted the Moon out of Earth orbit and into deep space (an event that has been seared into our collective consciousness through repeated viewings of footage from Alpha's internal cameras):

It seems hard to believe, but only 7 years after the Moon was stripped from the sky, the events of Sept. 13, 1999 seem distant and remote -- as if they had happened 30 years ago, not 7.

To commemorate this horrific event, and to honor its victims, I've created some graphics to show our resolve and prove to those who would harm us that we will NEVER FORGET: 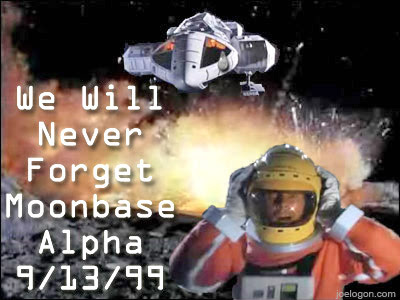 Similarly, we must always remember the heroism of the Eagle Transport pilots and crew as they tried to rescue the trapped Alphans: 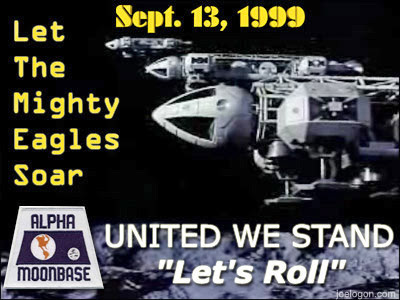 May the victims of the Moonbase Alpha attacks always be remembered: 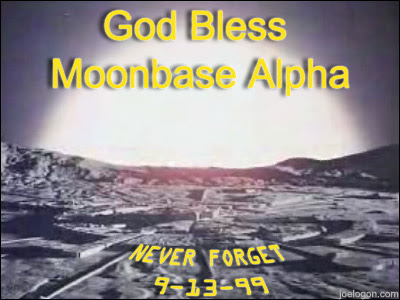 Spread the word with graphic badges:

Okay, so I liked Space: 1999 as a kid. I had some of the toys -- an Eagle transport (not the big one... though I wanted it), the playset (with action figures), the Colorforms, and a jigsaw puzzle. But I'm not a diehard fan. I don't participate in any of the online fan forums. And I especially never thought I'd be doing up tribute graphics for the "anniversary" of a fictional event from a 70s TV show.

I blame YouTube, and two blog entries that were floating around the geekosphere last month: The best and worst sci-fi openings of all time.

I didn't geek out about the lists then and I won't now (other than to say that the Blake's 7 opening and closing themes should have been on the best list).

Not only did the Space: 1999 theme song bring back memories, but it rocks. It still kicks ass (listen to that bass line! the wailing guitars! the orchestral break!) -- and it's aged really well (unlike, say, the Star Blazers theme, which, though still epic, is a lot more like a show tune than I remembered).

Obviously, because of the Sept. 11 anniversary, we've been seeing a lot of remembrances and memorials on the Web, including graphic tributes of genuine sincerity (but varying quality) with crying eagles and "Never forget" and such.

I think it was the eagles that did it for me. Eagles and the Eagle Transporter. I guess you had to be there.

Anyway, I'm not trying to make fun of anyone's 9/11 memorial graphics -- I guess I just kind of overloaded on them over the past week. So that's why all this "Never Forget: 9/13/99" silliness.

Nothing silly about it.

(Well, perhaps a *bit* silly, but in the best way possible.)

thanks... now I have that song running through my head....


Get Your Eagle Fix Here, Alphan