I met with Chuckie last night. Hutch acted as middleman and broker, but it's apparently crunch time at the place that's poaching all of my cow-orkers, so he couldn't stay.

The original plan was to meet at Lucky Bar, though when I got there, the doorman wouldn't let me in, since I was wearing sneakers.

Apparently, sneakers are verboten, though flip-flops and sandals are okay.

(I got the invite late Monday afternoon, so I could have stopped by my place and changed on the way in. Instead, I stopped in Arlington, hit the CD cellar, then parked my car on the street and took the Metro in.)

It wasn't really a big deal, as we just wanted a place to hang out and talk, and it was some sort of salsa night (or so I'm told), so I went and got an empanada while we were waiting for Chuck to show up. Which he did -- just after Hutch headed back to the office (right across the street). We yelled at him to come back: 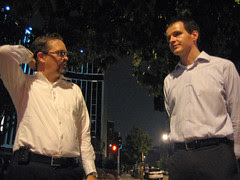 We hung out a little bit, then headed up to The Big Hunt (yes, the Big Hunt) after Mike went back to work.

Conversation was just like old times, so it was the usual free-ranging discussion, covering everything from real estate, hallucinogens/psychadelics, Bob & Edith's Diner, the CIA, global renditions, small arms, K Street lobbyist assholes, old times at AOL, thermobaric weapons vs. fuel air explosives, turn-based computer wargames, terrorism, geopolitics, and computer metaphors. ("When your religion starts telling you to blow yourself up, it's time for a hard reboot." And that was me talking.) 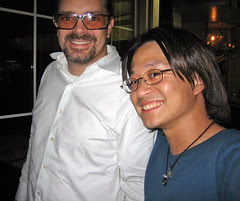 I had to go catch the last Metro, but Chuck twisted my arm, so we stayed until closing (about 1:30am on a Monday night), and then cabbed it back.