Just a Skate on the W&OD Trail

So, since I've essentially spent the first half of this 4-day holiday weekend holed up in my house, watching TV, eating Pop-Tarts (2 strawberry frosted, 1 cinnamon frosted) and doing my best hermit impression, I figured I should get out a bit today.

I went skating on the W&OD Trail, as I am wont to do, starting out at Reston Parkway and heading west. It was hot, partly cloudy but relatively dry.

Of course, I failed to put on any sunscreen. I guess I did this because it started out kind of overcast.

Also, I apparently believe that I can skate faster than light.

Needles to say, I think I reburned my chest (I doffed my shirt after the first half hour or so).

I did take my camera along (which I don't recall doing before) and snapped a couple of photos: 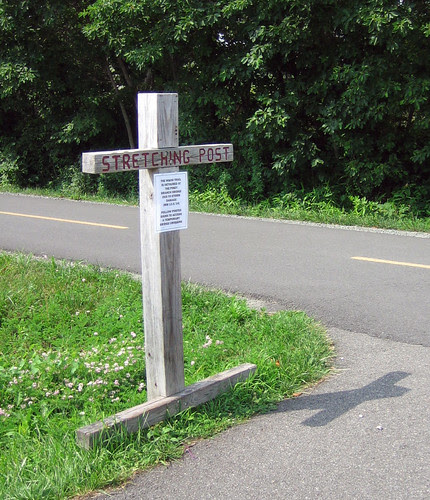 He Stretched for Our Sins 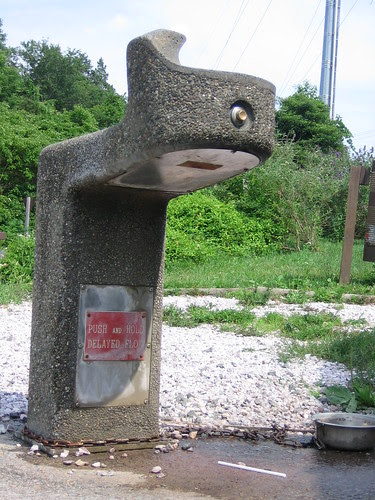 Deceptively-labeled water fountain -- it says "Delayed Flow", but it will take your head off.

I turned around at Smith's Switch Station and came back, so maybe did about 16 miles. I was pretty gassed by the time I got back -- I started cramping up and I had some nice blisters going on the insides of my arches.

Fortunately, I was able to limp inside the 7-11 and get my customary post-skate Slushee (thereby negating any possible caloric benefit).

After I got home, I poured a glass of Gatorade from the bottle sitting on my counter, to help with the cramps. (Clear Flavor, whatever that's supposed to be.)

I took a sip; it was pretty bitter. I then realized that the bottle had been opened and been sitting on the counter for about a month. At least. And it does say "Refrigerate After Opening."

I poured out the bottle and then finally saw the mold colony that had been growing in the bottom.