I made jambalaya this afternoon. Maybe it's not true jambalaya, but it's jambalaya-ish.

It's pretty plug-and-play, especially since I cheat and use a lot of shortcuts -- I put it together from whatever I have handy, throw it all into the rice cooker and let it go. 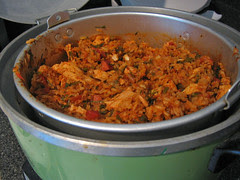 I don't really have a recipe, it's more like a procedure:

It came out pretty good -- not as much heat as I would have liked, and could probably have used some more salt. Oh, and I should have seasoned the chicken before browning it. Sometimes the rice at the bottom gets mushy, but it wasn't too bad here.

About the only bad thing is that there's a lot of it -- I'll probably be eating it for dinner every night this week. 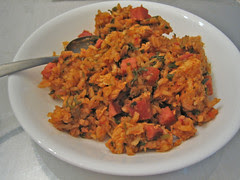