Okay, fine: As a well-adjusted, well-read grrl or womyn, you think you know about urinal etiquette (like the inviolable no-peeking rule). Maybe you've even heard of the Principals of Urinal Selection.

Leaving aside just how much you actually don't know about the admittedly elaborate and convoluted rules of urinal and men's room etiquette, here are some other things you don't know:

* Swisher-brand urinal mats (plastic screens that sit over the drain hole so you don't flush yourself down the pipes) have "SAY NO TO DRUGS" printed on them. Don't believe me?: 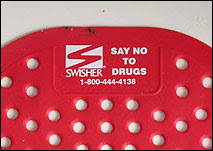 * Under the right (read: horrible) conditions, you can smell the urine of the guy next to you. If you're really lucky, you can smell what he's been ingesting (example substances include: coffee, beer [especially the day after], penicillin, and for some, asparagus)

* Shaking: (because, you know, guys don't use toilet paper after they piss) There exists a truism: "If you shake it more than once/twice/three times [varies according to teller], you're playing with it."

* Bonus Fact: It's possible to drown in a urinal. (Actually, I didn't know this myself until I saw the Wikipedia entry.)

When it comes to overall quirks, though, women are much more nutso than men. I mean, come on: It's not even close.

(As to the impetus for this entry, I blame two factors -- Conor, for telling me about the stupid Miller Lite Man Laws ad campaign, and Washington Post columnist Gene Weingarten's chats)

Nice post. I actually only learned a few months ago that many men choose to pee in the stalls. I guess they're shy or something.

Yes, the topic of the pee-shy and stall boys is a whole 'nother discussion that I shall leave to others.

"Any more than three shakes is a sin.

re: "stall boys", the game you linked (which of course I completed with flying colours) doesn't take that into account. Let's say you have the following configuration

Where "S" is the stall (with accompanying wall) and A-C are urinals. If A and C are taken, one would certainly use the stall rather than use urinal B.